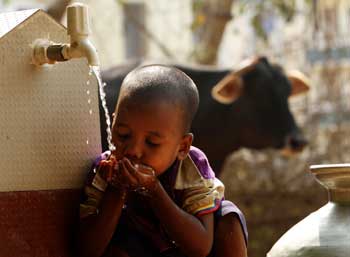 Odisha Channel Bureau Bhubaneswar: A day after opposition parties criticised his government in the State Assembly for its failure to deal with the drinking water crisis, Chief Minister Naveen Patnaik dedicated 100 piped water supply projects in 26 districts of Odisha on Thursday.A total of 1,72,000 people will be benefited by the 100 projects that dedicated by Patnaik at a function held at the State Secretariat here.Keeping an eye on the panchayat elections scheduled to be held next year, Patnaik announced that all gram panchayats will be provided with piped water supply projects by 2017.The number of piped water supply projects which was 459 in Odisha in the year 2000 has increased to over 10,000 by now, Patnaik informed.The Chief Minister said that drinking water was being supplied to scores of villages at present to cope with the drinking water crisis that has arisen due to the heat wave situation prevailing at present.Steps had also been taken to repair the defunct tube wells in the State, he added.