Odisha Channel Bureau Bhubaneswar: Since more Odia people use Facebook than Twitter, Odisha Chief Minister Naveen Patnaik’s Facebook page has received more number of likes from the Facebook users in just three days time.While Patnaik has 37.6K followers in Twitter where he opened his account a few months ago, his Facebook page as public figure (https://www.facebook.com/Naveen.odisha) has received more than 46,000 likes though he opened the page only on May 2. 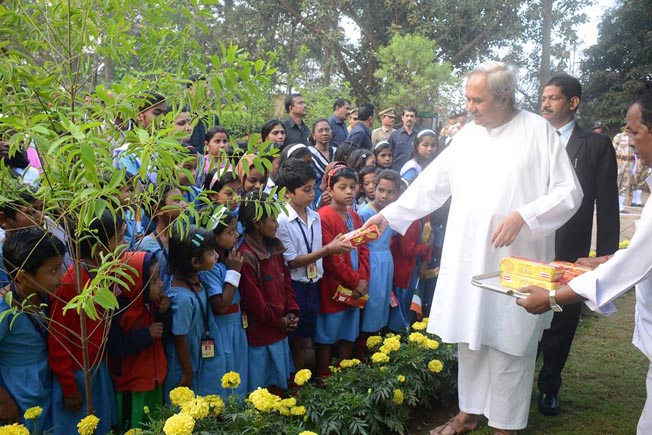 Patnaik has received mixed reactions from the Facebook users.Though many people who have liked his page have responded to his `Jai Jagannath’ and many have praised his leadership in their comments, several of those who have liked his page have criticised his one rupee per kilo rice and Aahar meal that is available for five rupees.A visit to his Facebook page makes it clear that Patnaik, as Chief Minister of Odisha and president of Biju Janata Dal, has received many suggestions which his assistants would have a tough time to note down and act upon those suggestions.OdishaChannel.com is reproducing some of the comments from Patnaik’s Facebook page below.“With the blessing of Lord Jagannath Odish’s True Leader Naveen Patnaik his love and affection to the people of state and his commitment for development of our state will remain forever,” wrote Bijaya Kumar Nayak, general secretary of BJD on Patnaik’s page.“Sir do work for general caste,” says Santosh Kumar Boxi from Gajapati.“Jai Jagannath.A True Leader.We all Proud of u,” wrote Partha Sarathi Muduli, general secretary, Biju Chhatra Janata Dal.“Jai Jagannath…but u can’t leave everything on him…u have to work for Odisha, if i am not wrong its ur 4th term.Please do some innovative work for Odisha.Please leave ur arrogance and talk to PM Modi and get some idea.Odisha is 20 to 25 year behind other state,please dont compare with Bihar…” commented Alok Kumar Dalai from Vadodara, Gujurat.“Do some work for the states which will make some senses among the people not by providing rice of rs 1 and aahar yojna..young students are leaving their home land and states for jobs..in odisha there is nothing left for the job seekers.many of the job seekers are struggling to get a job in odisha especially engineering students.If you have no capable to provide jobs for engineering students of your states,then you have no rights to open many engineering colleges in odisha and also to rule in odisha..creates jobs for the state students,we dont need your rs 1 rice and rs 5 aahar yojna,” wrote Sahoo Megha Malhar from Bhubaneswar.“Corrupted administration thile unnati heai paribani …transfer pain paisa …representation pain paisa deai deai ta chora …kan unnati haba amara …au amara na hele desara kan unnati karibu,” wrote Sanjaya Prusty who lives in Sundargarh.“Don’t give 1 rupee rice to poor and 5 rupees rice n dalma to ppl…This is completely vote bank politics…If you actually believe in development, create job opportunities for the young ppl.Do not donate something in free to get votes…..work for 24 x 7 current all over the state, make education system more better so that ppl will go to govt school,same applicable in health sector.as well..don’t just give something free to ppl to get votes…this is worth politics…If you really care for poor, give them the job opportunity, so that can earn and eat, give them 24 X 7 current, make the village road better etc…..,” wrote Sanjaya Prusty in another comment.“Sir in our state corruption increases .everywhere corruption is done plz sir take some immidiate step to control this …jay jagannath sir,” wrote Omprakash Mishra from Bhubaneswar/“We need to promote the compulsory of bills at every wholesale and retail counters.we need to promote a library in each village, paid or w/o pay,” wrote Dillipkumar Sahoo from Cuttack.“Best cm because, we spend 7thousand to 8thousand per month for grossery ngreen grocer.Now our family eat bhata dalma in 1500/- per moth.How shrewd our cm to get vote,” wroteBrundaban Mangaraj, a life insurance advisor.“Namaskar sir apananka dalaru chora netanku out karantu …nahele bjd dalara vabamutri nasta haba…jay jagannath….,” wrote Niranjan Palai from Puri.“Sir app ek high lable miting bulakar har MP.MLA.Ko bulakar ek miting karke apas main tu tu main main jo chal raha hai isko rokana chahiye nehito BJD Dal age loss main padjayega sir.Please ese dhyn dijiye,” wrote Jagannath Sahoo from Cuttack.“Once upon a time in our childhood we used to have in our Upper Primary schools.Small plots allotted to group of students to plant something of their choice, water them dragging water from the well use to enjoy the fun of healthy competitions among us whose vegibatables or spinachs are more healthy.I am from Kapaleshwar UP School, Choudwar, Cuttack and our Head Master was Sri Shrinivas Mishra.Kindly introduce again that practice to make the child connected to earth and being as well…With a hope….,” wrote Sharada Bharaty, a freelance photographer based in Bhubaneswar in her post on Patnaik’s page.It remains to be seen whether Patnaik would be able to respond to those who are liking his Facebook page and giving suggestions on various issues.