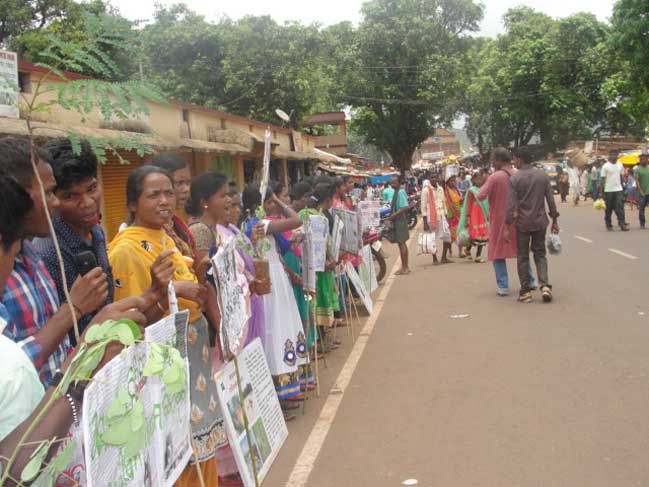 Odisha Channel Bureau KORAPUT: Armed with various posters on global warming, the students of Ecovillage design education in Odisha’s Koraput district organised public demonstration on Monday educating the villagers about the ill effects of climate change especially for the next generation.Pinpointing the unprecedented increase of heat souring over 40 degree Celsius this year, these indigenous boys and girls explained the need for alternate way of living, going back to tribal tradition of respecting nature and warned the villagers not to be tempted by the new paradigm of development preached and promoted at present which affect nature of the land, water, air and forest.The indigenous students who are trained by Siddharth Village prepared the sides of the road nearly a kilometre by digging pits for planting trees during rainy season.Explaining the reaction of the nature due to cutting of trees and denuding forest by people and corporate in the area, they educated the public the need for planting trees in all possible places to beat the heat.Even one degree of temperature increase indicates the risk of extinction for 20-30 percent species and mortality from heat, floods and drought and affecting water availability and so it is high time for urgent action to plant thousands of trees in Koraput and bring back the earlier conducive climate of Koraput as before said, G.John, Executive Director of THREAD, Siddharth Village who spearheads the Ecovillage movement in Odisha.Detailing the four week course of Ecovillage Design Education certified by Gaia Education, United Kingdom, Pradyut Nayek, Permaculture specialist said that the students learn practically permaculture, worldview, social and economy during this four week course which transform their life by understanding self, others and nature. This public demo is the immediate effect of the course they underwent for past two weeks, he added.This novel way of public demonstration turned the village market to a massive class room for the public both educated office goers and uneducated indigenous people with all these activities by these tribal youth students raised eyebrow of passerby.