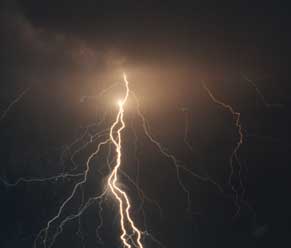 Odisha Channel Bureau Bhubaneswar: At least 17 people were killed and 14 injured as lightning struck during thunders quall accompanied by pre-monsoon rains at different parts of Odisha on Wednesday afternoon.While four persons died when lightning struck in Jatni area near Bhubaneswar, four each were killed in Kendrapara and Ganjam districts, two each in Mayurbhanj and Bhadrak districts, and one in Nirakarpur area of Khurda district.The victims were either working in open field or sheltered under trees when they were struck by thunder squall.The Bhubaneswar Meteorological Centre has predicted thunderstorm accompanied by rain over north Odisha on Thursday.Prime Minster Narendra Modi is scheduled to address a rally in the district headquarters town of Baleswar (Balasore) in north Odisha at 9 am on Thursday.Lightning has been killing many people during these summer months in Odisha every year.More than 20 people died due to lightning in April this year.Further, as many as 174 sunstroke deaths were reported this year.The government has not finished its probe into those deaths due to sunstroke so far.