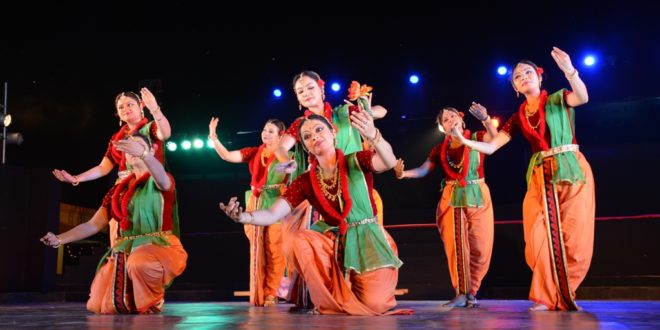 Odisha Channel Bureau
BHUBANESWAR: The 13th Dhauli-Kalinga Mahotsav got off to a colourful start at the foothills of ancient Dhauli Shanti Stupa here on Monday evening with an invocation of peace befitting to the occasion commemorating what King Ashoka had professed in 3rd Century BC.

The festival, jointly organised by Department of Tourism, Government of Odisha and Orissa Dance Academy, contains cultural multiplicity and a whole range of diverse stream of performing arts, be it classical, folk or martial.

The festival is a unique confluence of more than 500 artistes belonging to various art forms of India and it celebrates Unity in Diversity.

The structured programme started with Aikatana – a confluence of Odissi Dance, Aikatana is a harmonious ensemble of expressional brilliances in Odissi. It’s a celebration of diversities within the tradition of Odissi – 7 Groups, 7 Gurus and 7 Styles are coming together to celebrate the spirit of oneness in Odissi.

In Aikatana Brahma as absolute void and he is the beginning of the beginning. From one Brahma and the union of Jiba and Parama, three representing Trishakti-Mahakali, Ugratara and Dhumabati, four signifies the four ages, five portrays the five senses, six represent the six enemies, seven goes for seven colour eight talks about Ashta Sambhu, nine contains Nava Rasa and ten represents Dasabatara.

Last item of the first evening was Martial Art – Kalarippayattu by Belraj Soni and Group, Mumbai. Kalarippayattu is the age-old physical cum-martial art of Kerala. The main elements in this art form is physical culture, armed and unarmed combat, breath control, higher forms of meditation and specific classes of treatments.