Odisha Channel Bureau
BHUBANESWAR: Given the huge demand and supply gap of power in the country and the pressing need for energy security, climate change and sustainable development, the Odisha Electricity Regulatory Commission (OERC) has been promoting clean energy technologies through its rooftop solar power plant and net metering orders. 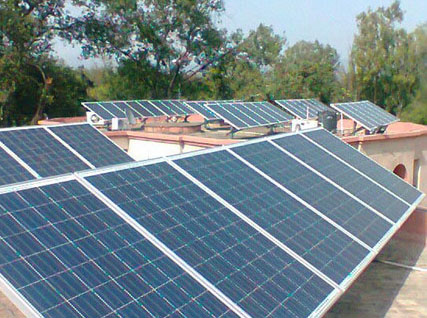 India has a huge potential for deployment of grid connected rooftop solar photovoltaic power generation plants due to abundant sunshine available almost all through the year.

Solar panels are virtually maintenance free since the batteries require no water or other regular service and will last for years.

Once solar panels are installed, there are no recurring costs. Solar energy is being recognized as the future of alternative energy sources as it is non-polluting and helps combat the Greenhouse effect on global climate created by use of fossils fuels.

The Solar Panel receives the solar energy by the process of absorption. The SPD protects the device or the system from getting over heated due to absorption of heat.

The PCU converts the DC (direct current) to AC (alternate current). The SM records the amount of energy that is generated by the system overall. The battery stores the energy that is being generated.

When the SM records the amount of energy being generated by the system, the net meter records the import from/export to the distribution licensee. In case of import from the Discom to the consumer, the licensee shall raise the bill for net energy imported after adjusting any carry forward of energy from the previous billing cycle in the same financial year.

In case of export to the Discom by the consumer, the energy in excess of consumption shall be carried forward to the next billing cycle for adjustment against the next bill. The carry forward of excess energy will only be allowed from one billing cycle to the next, till the end of the same financial year. Any excess energy generated at the end of the financial year would not be offset against future consumption.

Such power plants can be installed at the roofs of residential and commercial complex, housing societies, community centers, government organizations, private institutions.

The potential consumers can approach the distribution licensee who will execute an agreement with the concerned party and install the net metering system after the Rooftop Solar project is installed.

The owner is offered a 30% front ended capital subsidy on the project cost by the MNRE. The approximate project cost for Rooftop Solar is approximately Rs. 70,000 per kilowatt and can be recovered within a period of 6 to 7 years and the owner can be proud of being a responsible citizen and caring parent to future generations.

The electricity generation will also contribute to bridging the demand and supply gap. The rooftop solar photovoltaic power generation also enables the obligated entities to comply with their solar purchase obligation targets as specified by the Regulatory Commission.

As per the OERC’s enabling net metering order, cumulative solar energy capacity at distribution transformer level is now allowed up to 75% of transformer capacity. Maximum solar PV capacity is, however, limited to sanctioned load/contract demand of the individual consumer.

The system either roof-mounted or ground-mounted will be connected to the Distribution network and treated as a project on the consumer side of metering and will be allowed for net-metering.

Most of the solar energy generated by a consumer is self-consumed or consumed in the immediate neighborhood. Thus, the distributed generation and local consumption of such Solar Energy will reduce the technical losses pertaining to respective distribution network, particularly in the LT segment. This will also help DISCOMs in improving their commercial efficiency by way of reduction of input energy.

The OERC has installed a 25 KW rooftop solar project in its own building and has been effectively utilising clean energy for its needs while offsetting cost of energy bills.

To develop a market for grid connected rooftop solar projects, the Government of Odisha is also undertaking a pilot project of 4 MW on net metering model on Govt. buildings in Bhubaneswar and Cuttack cities through PPP route on BOO basis.

As many as 126 such buildings in Bhubaneswar and 73 in Cuttack with total capacity of 2,890.72 kWp are included in the project.

The Commission is continuously endeavoring to improve upon the schemes considering technical advancements.