Apart from special measures and schemes for education and health, panelists also suggested more economic independence of the state to generate own revenue from land revenue, stamp duty and motor vehicle taxes. 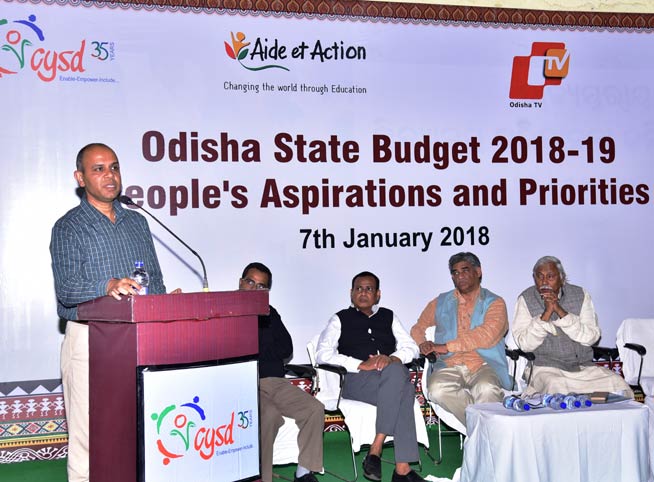 Experts from different walks of life and fields discussed and brainstormed on issues relating to water sanitation, ST & SC development and agriculture.

The State’s public expenditure on health has increased gradually over the years. Despite this, the state still struggles with high levels of out of pocket expenditures, a phenomenon that disproportionately affects the poor, as well as with poor accessibility and quality of healthcare services in remote areas.

For equitable access to good quality of medical services like diagnosis and ultra sound facilities at Community Health Center (CHC) level, more health sub-centres in tribal dominated blocks, is the need of the hour for unhindered regular provision of public resources for health care, said the experts.

As per current trends in budgetary allocation for construction of household latrines, it is evident that the deadline of 2019 to ensure achievement of Open Defecation Free (ODF) Odisha is unlikely to be met. This is also borne out by the fact that, out of the total rural households in the state, only 36,72,135 households have yet been covered and 44,71,877 households still remain uncovered. Therefore, to meet the total target a figure of Rs. 5,366.25 crore needs to be allotted.

The sub-optimal investment in elementary education has resulted in a lack of professionally trained teachers, a lack of adequate facilities in schools, an inexplicable disparity within Odisha Government Schools in salaries of teachers, a lack of proper monitoring and overall a poor quality of education. Yet, of all elementary schools run and aided by Odisha Government, 9.3% are single classroom schools, 3.6% are single teacher schools, and 70% do not have playground facility.

Further, 20% of the contractual teachers in these schools are not professionally trained and the drop-out rate is high at the elementary levels (8.59% at class V and 7.21% at class VIII.). Similarly, Of 71,306 AWCs and mini AWCs in the state, around 35,000 are now being run in their own dedicated pucca premises and another 15,000 such pucca premises are currently under construction. Yet, these 50,000 (35,000 existing and 15,000 under construction) pucca premises are also inadequate to meet the needs of the state’s existing 71,000 AWCs.

The strategies envisaged earmarking plan budgets for STs at least in proportion to the share in the total population, which is about 23% at state level as per Census 2011, allocates around Rs. 11,000 crore in the budget 2017-18.

However, expenditures like salary, DA, other expenditure and for other purposes fail to spot the clear intention of Tribal Sub Plan (TSP). A revised guideline for the earmarking of SCSP/TSP funds by the state should be in place for 2018-19 budgets. The revised formula/guidelines should encourage the Departments to carry out need-based budgeting for SCs and STs, aimed at addressing the specific challenges confronting these communities in their respective sectors of concerns. Departments should be encouraged to introduce targeted schemes for SCs and STs as well as include specific components for them in their existing schemes.

In case of agriculture, Odisha has seen no dynamism in the past years. The welfare concerns of the state’s farmers still remain largely unaddressed. During the period 2011-16, the average annual growth rate (in CAGR percentage terms) was only 3.4%. Besides, frequent floods, droughts and natural calamities have made Odisha disaster prone, which has seriously affected livelihood, livestock, biodiversity and sustenance in most districts.

Organic farming is a serious priority for the state. This not only helps in ensuring nutrition security but also in ensuring sustainable livelihoods for the people. With the increased importance of rain fed agriculture on one hand, and the need to come up with a risk proofing investment framework for fighting severe drought conditions and crop loss scenario in the state on the other, larger resource allocation towards rain fed agriculture development schemes is required for growth in agriculture produce, livestock, fisheries and dairy, stated experts .

Ashok Meena, Principal Secretary (in-charge), Finance Department said, “Providing employment opportunities and making youth self employment is the focus of the government. The governance should reach the people in the bottom. We request people and experts to suggest the government for the upcoming budget.”

“The state government is facing a challenge to pay the employees according to the 7th pay commission. This would have an impact on the government while preparing the annual budget. The government would also roll out welfare schemes to woo the public ahead of the 2019- election,” said former Finance Minister Panchanan Kanungo.