Odisha Channel Bureau
Bhubaneswar: One of the two cubs born to tigress Ankita at the Nandankanan Zoological Park died on Saturday evening. 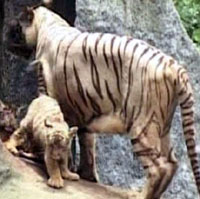 Tiger population at Nandankanan, which had increased from 24 to 26 after Ankita gave birth to two cubs in captivity, has decreased to 25.