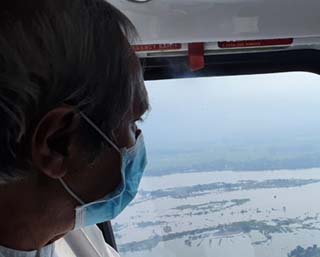 “Expeditious steps are being taken to restore normal life in flood affected areas,” said Patnaik in a tweet after conducting the aerial survey of the flood-hit regions.

The flood has waterlogged many districts, marooned many villages, agricultural crops, and damaged houses, disrupted roads and other infrastructure, said Patnaik in his tweet.

Although the flood situation has improved in many areas, the floodwaters of several rivers, including Subarnarekha, Budhabalanga, Baitarani, Kharasrota, Brahmani and Mahanadi have affected 14 lakh people and left at least 18 persons dead.

While relief operations were being carried out in worst affected areas of Bhadrak, Jajpur, Kendrapara, Jagatsinghpur, Pur, Cuttack and Khordha districts, the administration has started assessing the damages caused by the flood and the breaches that occurred in river embankments at various places.

Patnaik, who reviewed the flood situation after conducting the aerial survey, ordered that the people who had been rescued would be provided cooked food till their stay in the flood shelters.

The Chef Minister announced that all flood affected families will be provided 50 kg rice and Rs. 500 each as assistance.

The families whose houses had been damaged will be provided polythene sheets.

Patnaik further ordered that the District Collectors concerned will complete the assessment of damages within 15 days.

The financial assistance for damage of houses will be provided over the next one week as per the rules of the State Disaster Response Fund, he said.