Odisha Channel Bureau
Bhubaneswar: Ramping up testing to detect coronavirus infections in the State, the Odisha government has succeeded in testing million samples by Thursday, according to officials.

“Glad to share that we have reached 2 million COVID-19 test milestone. Thank everyone who worked tirelessly to scale up testing facilities in short time across Odisha and ramp up testing expeditiously, strengthening our fight against the pandemic,” said Chief Minister Naveen Patnaik in a tweet.

State Health Department officials said that Odisha had been able to conduct 42,404 tests per million of its inhabitants which was much higher than the national average. The recovery and death rate in the State was 76.78% and 0.46% respectively. 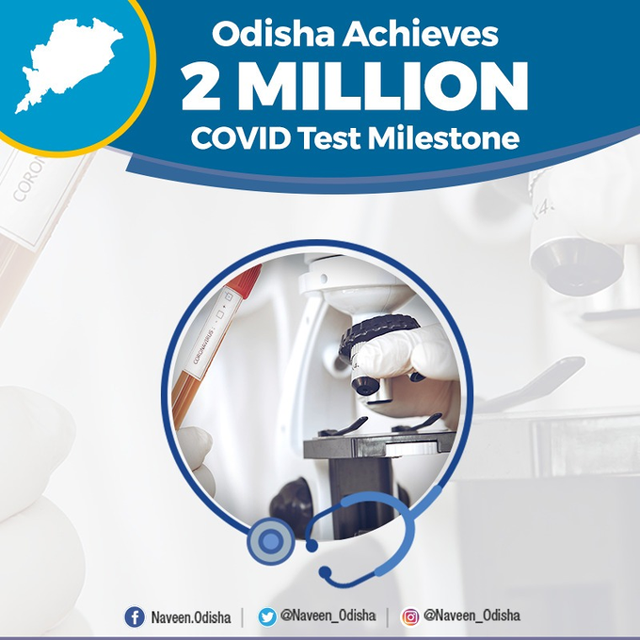 Patnaik, who reviewed the COVID-19 situation through video conferencing, expressed satisfaction over plasma donation by 100 personnel of Odisha police who had recovered from COVID-19.

The Chief Minister also directed the administration to increase the number of number of intensive care units in the COVID hospitals in different districts of the State.

Patnaik also advised the authorities to strengthen strategy in Cuttack and Khordha districts.

It was revealed during the review meeting that in agricultural sector, 55.52 lakh hectares of land has been cultivated in Kharif season this year, which is 5% more than last year. Crop loans worth Rs. 9,965 crore have been disbursed, which is more than what was disbursed last year.

Between April and August, 200 new projects worth Rs. 17,514 crore have been approved in the State with potential to create 13,000 job.

It was announced that loans worth nearly Rs. 3,000 crore will be disbursed to more than 1.5 lakh MSME units by end of September.

The Chief Minister also suggested GST reimbursement process to be made completely transparent and easy.