Odisha Channel Bureau
Bhubaneswar: At least seven labourers from Ganjam district were killed when the bus they were travelling in met with an accident in neighbouring Chhattisgarh on Saturday.

The ill-fated bus was on its way from Ganjam to Surat when the accident occurred in Raipur, according to reports. Around 20 labourers were in the bus when the vehicle collided with a truck.

Chief Minister Naveen Patnaik expressed deep grief at the tragic death of the seven labourers in the road accident in Raipur.

Conveying his deep sympathy to the bereaved families, Patnaik announced ex-gratia of Rs. 2 lakh each from the Chief Minister’s Relief Fund to the next of the kin of the deceased

In fact, hundreds of Odia migrant workers have started returning to other the States from where they had returned their villages in the wake of the enforcement of the nationwide lockdown to check the spread of COVID-19. 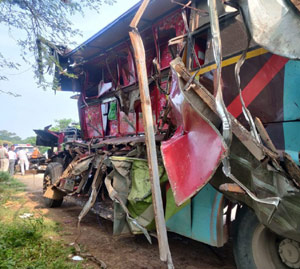 Vehicles of different shapes and sizes with number plates showing registration in other States can be spotted in interior areas in different regions of Odisha these days.

The Odia migrant workers had returned from States such as Gujarat, Kerala, Tamil Nadu, Maharashtra, West Bengal and other States as uncertainty haunted them in their respective places of work due to prolonged lockdown.

Initially, many of them were in no mood to go back to the distant cities. But they have started returning since earning a livelihood was in their native places was a distant dream.

A majority of the returnees were also not keen to work under the GNREGS in the State which fetches them less money and it take times to get the payment, according to activists.

The recent floods in several rivers also added to their plight in their villages in several districts of Odisha forcing them to respond to the phone calls of their previous employers who were ready to send vehicles to carry them back to their places of work.

Some migrants have also started returning by trains after the lifting of the lockdown restrictions.