About 250 km from Odisha Capital Bhubaneswar lay Sitabinjhi hills of Keonjhar, famous for the fifth century old rock paintings known as the Ravanachhaya paintings.Ravanachhaya means the shadow of the demon king Ravana. 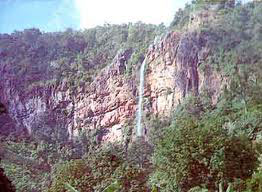 The paintings are seen at the lower part of a protruding gigantic boulder which is so large that it is called Ravana, hence the name!

The boulder stands 22 feet above the ground and is set on another massive rock forming the shelter for the paintings.It is an amazing piece of painting which is done at the high ceiling with extreme artistic endeavors on a huge surface of 1250 sq cm.

From Kendujhargarh another 30 km leads to Sitabinjhi flanked by green forest and blue hills.Small tribal hamlets of tribal and the ruins of an ancient civilisation lie nearby.

Denguapahi is a large tribal village here.There is a lovely hill called Phulachangudi meaning basket of flowers.Each rock boulder is a treat for the eye with their natural beautiful shape.

The paintings have survived because these were done meticulously on a height that would not be tampered by onlookers and would be protected from the rain and dust.

Executed with natural dyes on the engravings they tell a tale of a royal procession.A king is depicted ridding an elephant and is accompanied by a horde of horsemen, foot soldiers and attendants.

The king is depicted returning victorious from winning a war.On his hands he holds a lotus flower and a goad.He is sheltered by an umbrella that is set behind him on the elephant.

The depiction of the elephant and the horses are done with such vitality that they look vibrant in expression and their powerful gait.

The elephant that the king rides is decorated with garlands from cowries and other ornaments and it seems it is the favourite war elephant of the king.

The attendants and the animals are shown walking in a row.There is an inscription below the painting which mentions the name of the king as Maharaja Disa Bhanja.

The paint used to enamel this painting are madder brown, yellow ochre, reddish black, indigo, black and white.The outlines are done with sharp strokes and are deeper hued and the body retains lighter shades.

These paintings have faded considerably exposed to the rain and inclement weather but imagine there were such artists in the fifth century AD who could paint the roof of a two story high boulder!

The place is believed to have been the passage between Magadha and Ajanta .There is enough evidence of a Buddhist cult that flourished here long ago.

At Pipalai about four km from Ravanachhaya, there is a row of seven caves on the top of the hill.Inside these caves there are many more priceless murals like those at Ajanta , which are yet to be explored.

The local people have closed the entry points fearing that the wild animals would inhabit these caves.Ferocious wild bears and poisonous snakes abound the site as such.There are ruins of brick structures suggesting that Buddhist monks of Hinayana sect once inhabited the place.

There are a few hillocks called Valmiki, Luv and Kush , Surpanakha and Ravana hinting at Ram’s banishment of 14 years and that he could have stayed here as well.

There is a hill nearby called Bhandaraghara meaning the store room where Sita was believed to have placed her ornaments inside a cave.This rock looks like a Hindu temple from a distance.

According to legend there was a saint called Nagarjuna who meditated here and he could turn brass into gold with his touch and it is believed that his tomb was filled with precious stones and gold.

As many as 10 inscriptions have been recovered from this site alone dating back to the period between fifth and ninth century AD.

eonjhar is 230 km from Bhubaneswar .There are scenic places like Sanaghagara and Badaghagara waterfalls nearby.There is the famous temple of Goddess Tarini .Khandadhar waterfall and Gonasika the source of the Baitarani river are the other scenic destinations nearby.