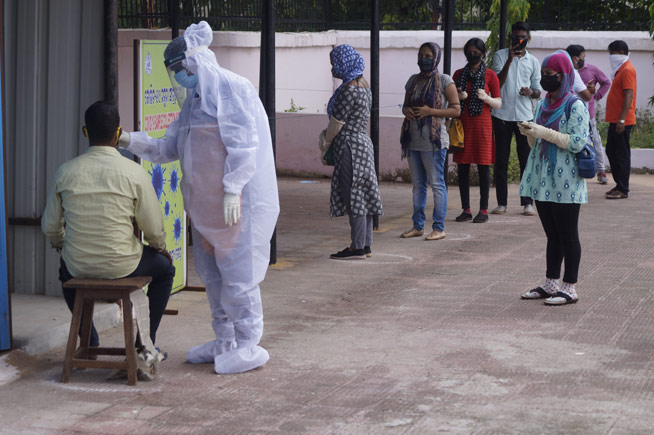 Odisha Channel Bureau
Bhubaneswar: As many as 3,913 new COVID-19 cases were reported in Odisha in the past 24 hours, taking the total to 1,50,807, according to a bulletin released by the State government on Sunday.

A total of 34,163 persons were in hospital isolation by Saturday evening, according to the State Health Department.

Intensifying the fight against COVID-19, the State government has ramped up testing and strengthened contact tracing and treatment. A total of 24,23,124 samples had been tested in the State so far.

After managing COVID-19 effectively in the initial months, Odisha is now grappling with rising infections, with the capital city of Bhubaneswar recording maximum number of cases during the past few weeks.

The neighbouring district of Cuttack too has been reporting a large number of new cases every day.

The situation in Ganjam, however, has improved with the district reporting less number of new COVID-19 cases during the past few weeks.

What has added to the crisis is that many doctors and frontline workers, including many policemen, have been affected the disease in different parts of the State. Many government employees belonging to various departments have also got infected by the novel coronavirus.

The State administration has been trying its best to strengthen the COVID-19 treatment facilities in the worst affected districts such as Khordha, Cuttack, Sundargarh and Ganjam.

“Best wishes to all appearing for NEET 2020 during this challenging time. May you all be successful and come through with flying colours,” said Chief Minister Naveen Patnaik has said in a tweet.

More than 37,000 candidates are appearing the NEET at as many as 83 examination centres spread over seven cities in Odisha today (September 13).

COVID-19 situation at the national level