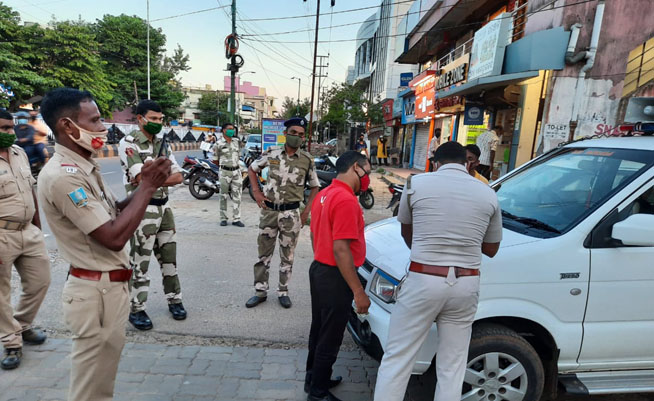 Odisha Channel Bureau
Bhubaneswar: The police intensified their enforcement drive for strict implementation of COVID-19 guidelines in the fight to contain the pandemic in the twin cities of Bhubaneswar and Cuttack on Thursday.

Special enforcement drives were conducted in different market areas and specified hotspots in both the cities following a review meeting by Director General of Police Abhay during the day.

Senior police officials of both Bhubaneswar and Cuttack attended the DGP’s meet to review enforcement of COVID-19 guidelines.

It was decided in the review meeting that 50 more officers and five platoons of armed police will be deployed in the twin cities.

The meeting decided that the capital city of Bhubaneswar will be divided in three zones for the purpose of the enforcement of the guidelines issued by the State government the spread of coronavirus.

The police of the twin cities are enthusiastic in spite of 11 Inspectors-in-charge and many senior police officials being infected by the virus, the DGP said in a tweet.

As many as 200 police personnel of Odisha have donated plasma at different locations in the State and saved the lives of other critical COVID patients.

Khordha and Cuttack districts have been reporting maximum number of COVID-19 positive cases for the past several weeks. While Khordha reported 647 cases, Cuttack reported 389 cases on Thursday. Bhubaneswar city comes under Khordha district.

Ganjam continues to remain the district to have reported second highest number of 19,444 cases. But the number of new positive cases in Ganjam is witnessing a sharp decline. The district reported 75 cases on Thursday.