Santosh Patnaik
Visakhapatnam: Two days after a young girl was brutally killed by her jinxed lover, Andhra Pradesh Home Minister Mekathoti Sucharita on Monday called on the bereaved family and handed over ex-gratia of Rs.10 lakh.

She said that stringent action would be taken against the criminals as per the AP Disha Act, 2019. 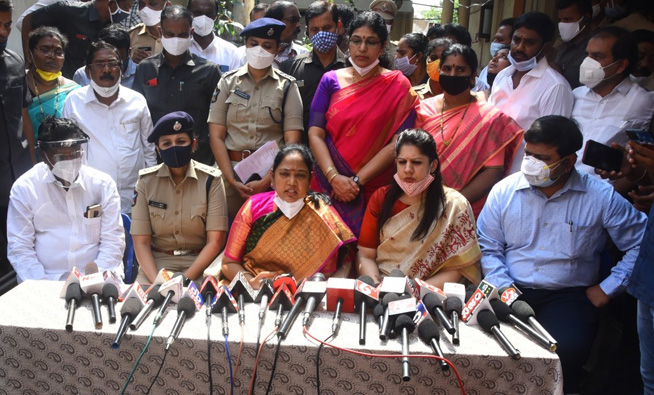 The legislation was enacted unanimously after the gangrape of a doctor near Shamshabad Airport in Hyderabad, which raised nationwide public outcry.

The murder in the city would be probed to file a charge-sheet in a week, the Minister said.

Varalakshmi, the victim, was found with her throat slit outside a temple at Gajuwaka here on Saturday night.

After booking a case, the Gajuwaka Police took into custody Akhil Sai Kumar, a law student of Andhra University and Ramu. Akhil, who allegedly had friendship with the deceased was upset after she started moving with Ramu.

On a directive of Chief Minister Y.S. Jagan Mohan Reddy, the Home Minister visited the house of Varalakshmi to express condolences to the family and handed over the cheque while assuring stern action against those responsible for the heinous crime.

She told media here that the Chief Minister took serious note of the murder and ordered an inquiry. She was accompanied by Disha special officers to create confidence among the family that the government would take immediate action against the accused.

The Home Minister said accused Akhil Sai had brutally murdered the girl after hatching a conspiracy to eliminate her when her family was busy with marriage rituals of a relative.

Sucharita said the government had brought about a stringent law for such offences and it would be made mandatory for every girl student to download Disha app. 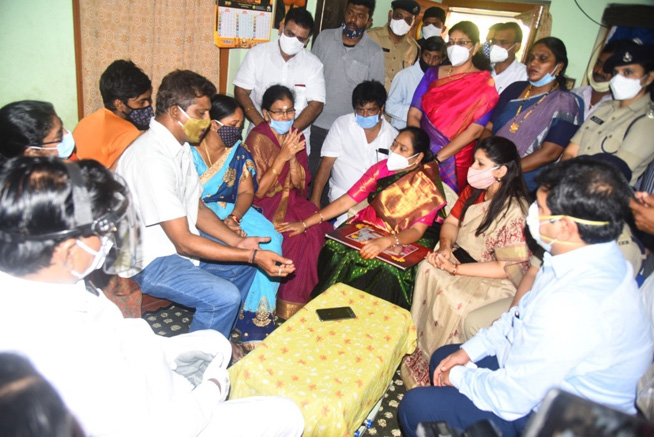 As per the Disha Act, inquiry has to be completed within 14 days of the offence to award stringent action including death sentences against the culprits. Protection would be provided to the victim’s family, the Minister said.
Bind-over cases would be booked against the parents of the accused. Preliminary inquiry revealed that the offence was committed intentionally and the inquiry would be completed within seven days.

In all, the inquiry into 390 such cases were completed within seven days and 108 accused were awarded punishment.

The Minister said women and girls should download Disha app and AP Police Seva apps with the help of women police personnel in every village and town. The Chief Minister has advised the Collectors and SPs to conduct special drives to create awareness about the app among women. So far, 11 lakh women have already downloaded the apps. All school children would be made to download the apps as part of a special drive.

Disha special officers Krutika Shukla and Deepika Patil, District Collector Vinay Chand and others were among those present.