Santosh Patnaik
Vijayawada: Andhra Pradesh Government will spend Rs.1,869 crore on distribution of sheep and goats to women for improving their livelihood.

The State is collaborating with Amul and others to provide a unit of sheep or goat each comprising 15 to BC, SC and ST women. 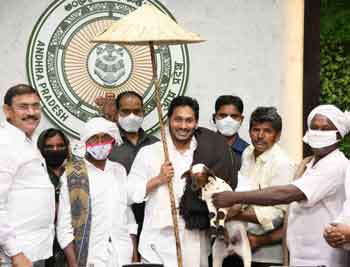 Launching the scheme on virtual mode from his camp office at Tadepalli, Chief Minister Y.S. Jagan Mohan Reddy said on Thursday that the scheme named ‘Jagananna Jeeva Kranthi’ was aimed at distributing 2.49 lakh units of sheep and goats in a phased manner.

Speaking on the occasion, the Chief Minister said the scheme envisaged raising the living standards of women with less labour and less investment. He said that by promoting agricultural allied sectors, more economic development would be possible.

Under the Jagananna Jeeva Kranthi scheme, women in the age group of 45 to 60 years will get 2.49 lakh sheep and goat units. The State will facilitate and provide suggestions, in case the women want to buy the sheep and goats on their own.

The Chief Minister said that the State has signed MoUs with Reliance, Allana group, Amul, HUL, Procter & Gamble and ITC to collaborate and empower women beneficiaries of YSR Cheyutha and Aasara schemes. The main objective of partnership is to provide more business opportunities and bring self-reliance among the women, by providing assistance for better investments.

Reddy said that Allana Group would buy the meat as the government has entered into an agreement with that company. However, if the price anywhere else is more remunerative than Allana, women can sell their produce directly and there is no compulsion that they have to sell to Allana only.

The government has also launched the distribution of 4.69 lakh units of cows and buffaloes with Rs. 3,500 crore to strengthen dairy sector, besides 2.49 lakh units of sheep and goats at a cost of Rs.1869 Crore, taking the total to Rs. 5,400 crore.

The government is committed for women welfare and their empowerment by launching various schemes like YSR Cheyutha, Aasara, zero-interest loans, Sampoorna Poshana, Jagananna Vidya Deevena, Vasati Deevena, 50% reservation in nominated posts and nominated works. Also, 31 lakh house sites are going to be distributed for women and get registered on their name, he said.

Irfan Allana, Chairman of the Allana Group, said that they would be more supportive of the schemes and programmes being implemented by the State Government.