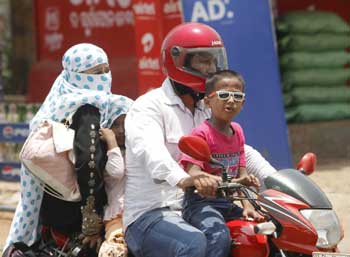 Odisha Channel Bureau Bhubaneswar, May 23: People across Odisha continued to reel under intense heat wave conditions today with several places in the State experiencing maximum day temperature of 45 degrees Celsius.Normal life was affected as many people preferred to stay indoors to escape the heat.More than 30 deaths due to sunstroke have been reported from different parts of the State during the past few days.As many as 11 deaths were reported on Friday alone.The street vendors virtually vanished during the daytime in Bhubaneswar and other cities of the State.The situation in rural areas of the State was no better as frequent power cuts added to the people’s woes.The heat wave condition has been prevailing in Odisha during the past few days with no sign of rain or thunderstorm.According to the Bhubaneswar Meteorological Centre, weather will be dry over Odisha and heat wave condition may prevail over the State till May 30.