Hooliganism can’t be the new political norm for Odisha BJP

By Kedar Mishra
Bharatiya Janata Party which runs the Government of India and ruling over 18 States has become so desperate in Odisha that it used violence as a medium of protest in last few incidents. The political protest of BJP against ruling Biju Janata Dal has come down to the level of hooliganism and vandalism.

On Saturday, a group of BJP workers forcefully entered into the house of V. K. Pandian, the secretary of Odisha Chief Minister Naveen Patnaik and vandalised his home in his absence. It is alleged that the violent BJP workers had forced the security guard on duty to carry the BJP flag and to shout slogan in favour of BJP. 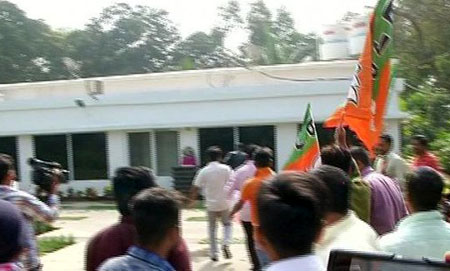 Defending the shameful act of hooliganism BJP’s state vice president Samir Mohanty said that “It is our legitimate right to protest against the officer and the attack on his house is the reflection of genuine mass anger”. It’s a terrible and undemocratic logic to defend the gutter politics where violence is being used to intimidate a civil servant who has nothing to do with political rivalry.

It is worth noting that Pandian has become the central target of most of Naveen Patnaik’s opponents. It was Baijayant Panda, Kendrapara MP who steered a clear campaign against Pandian after he was suspended from the primary membership of the BJD.

Panda believes that Pandian is responsible for his ungracious exit from the BJD and he began a one sided attack to corner Naveen Patnaik’s man Friday. None of the BJD’s Minister or leaders in the BJD is being targeted but it was Pandian who faced all kind of abusive languages and insinuations from political opponents which seems truly funny. The hard fact is that Pandian is bound to follow the rule book prescribed for a civil servant and politically he is not empowered to defend himself. As the secretary of the CM he is to carry his order as per law. Now political opponents of Naveen Patnaik are no way in a position to fight with his larger than life image, so they choose to hit a soft target in Pandian.

Initially there was a whisper campaign against Pandian in social media which later came to mainstream media through Baijayant Panda’s OTV. The leading TV channel of Odisha makes it a point to plant at least a couple of stories on daily basis against Pandian, without bothering about the basic journalistic ethics that the man who is being targeted is unable to answer any of the media queries.

Somehow there was a planned campaign to demoralise the Chief Minister by targeting his closest official aid. As a final result of this malicious campaign Pandian’s house was being attacked and his family members are being terrorised by political goons.

What compels the BJP to go for such an ugly fight against an IAS officer who had nothing to do with politics? Why do BJP failed to understand the basic morality and conduct of a political party and it goes against the civil norms of the protest? Are they desperate or it is the fear of failure which looks obviously larger to them in 2019 general election? Why the leaders of BJP and their new undeclared ally Baijayant Panda are shying away to fight a frontal battle with Naveen Patnaik? There are many questions which have had to be answered to the people of Odisha.

BJP has to explain its position on this particular event. They can’t simply hide behind rhetoric. They cannot go on defending lawlessness as their new law. With an imaginary hope to win majority in the 2019 general election in Odisha, BJP has become extremely arrogant and they have started taking law into their own hands.

This is indeed a dangerous trend and BJP should not forget the historical fact that how people of Odisha continue to be unkind to the Congress party since last two decades as they were convinced that Congress leadership was indeed rude, arrogant and hooligan and from that mass anger a sober Naveen Patnaik came to power.

Naveen Patnaik’s basic political charisma is his soberness and no nonsense conduct. In contrary, BJP’s hyper aggressiveness makes their political future more vulnerable in Odisha. People expect a national party to behave in a responsible manner or else they know how to show hooliganism its own place in appropriate time and opportunity.

(Kedar Mishra is freelancer writer, political commentator and art critic based in Bubaneswar)