Odisha Channel Bureau
Sambalpur: Four years back, Jaya Shankar Pradhan, 64, retired as a deputy manager in State Bank of India. But it was not the end but the beginning of another career for him. 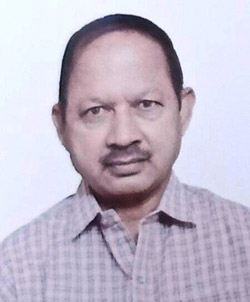 After completing his ISc in 1975, Pradhan, a resident of Attabira in Odisha’s Bargarh district, had appeared for the test to become a doctor but failed to crack it. Just after retirement from SBI, he started preparing for NEET to pursue the unfulfilled dream.

Pradhan’s hard work and efforts bore fruit as he cracked the test with flying colours and on December 24 took admission in the Veer Surendra Sai Institute of Medical Sciences and Research (VIMSAR) at Burla to study MBBS from this academic session. He is also physically challenged; he met with an accident when he was 10 years old and has a problem since then.

According to Pradhan, after his first attempt to get into medical college failed, he studied BSc in Physics. After graduation, he briefly worked as a school teacher before joining SBI as a clerk in 1983. However, the dream of becoming a doctor remained with him all along. “What gave me the hope to pursue my unfulfilled dream was the Supreme Court decision in 2018, which allowed students above the age of 25 to appear for NEET,” he said.

Two daughters of Pradhan too were studying Bachelor of Dental Surgery (BDS). Unfortunately, one of them died on November 20. His son is in Class 10.

Pradhan said that after becoming a doctor, he would provide free treatment to the poor.