Odisha to sponsor Indian Hockey teams for another 10 years

The Chief Minister, who felicitated Captain Rani Rampal and women’s team, and also felicitated Captain Manpreet Singh and men’s team here, said that the way the entire country was glued to the screens to watch the hockey teams’ matches it is quite evident there is something more to hockey than just sports 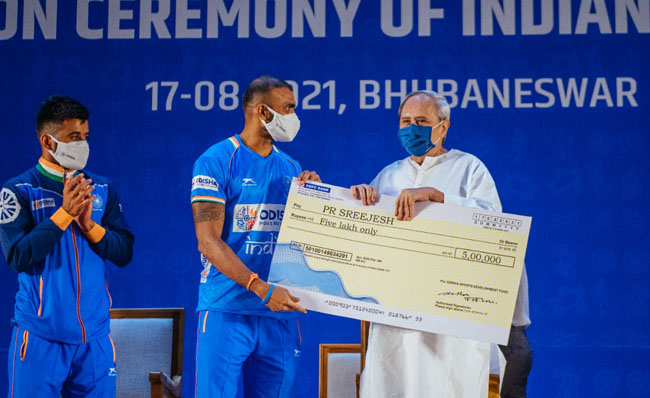 As a token of regards and appreciation, each team gifted a framed Jersey autographed by the players to Patnaik at the felicitation ceremony.

The Chief Minister said that the people of Odisha are elated that the State’s partnership with Hockey India has led to this great achievement for the country.

Stating that Odisha will support both the Indian Hockey teams for 10 more years, Patnaik said this will herald a new era of Indian Hockey and bring back the glory to the nation.

Odisha government has been the sponsor of the Indian national hockey teams since 2018. The sponsorship is for a period of five years with an assistance of Rs. 150 crore to Hockey India.

President of Indian Olympic Association, Narinder Dhruv Batra who has played a key role in the development of Olympic sports and sportspersons and in the revival of hockey in India and the prominence of Hockey around the globe was also felicitated by the Chief Minister.

Speaking at the felicitation, Batra thanked the Chief Minister and the people of Odisha for showing their love and affection for the sport of hockey and helping our teams achieve the Olympic dream for India.

“With your continued support, Indian Hockey will look to build on the achievements from the Tokyo Olympics, and continue this steady rise to take Indian hockey back to the elite level where it belongs,” said Batra.

“It feels good to be back here in Odisha, the place we call our home away from home, and now one of the biggest reasons behind our success at the Tokyo Olympics 2020,” said Captain of the men’s team, Manpreet Singh.

Earlier in the day, the teams arrived to a rousing welcome at the airport by fans and sportspersons alike. The atmosphere was euphoric with fanfare, celebrations and pride. They were received by State Sports Minister Tusharkanti Behera.