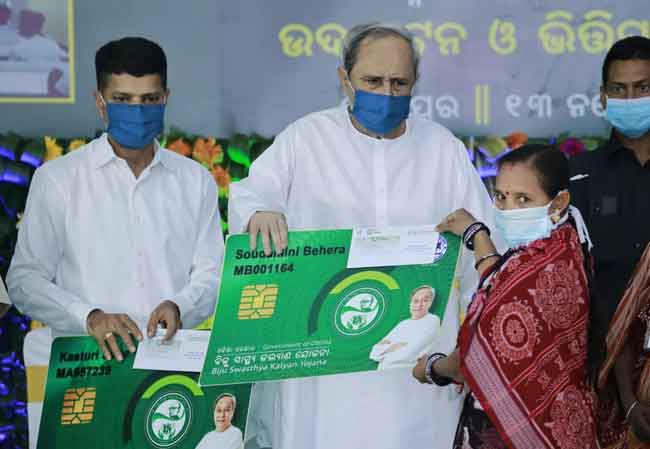 A total of 3.64 lakh people of Bargarh will get benefit under the smart health card scheme. Bargarh became the 11th district in the State to be covered under the BSKY scheme ahead of the forthcoming gram panchayat elections scheduled to be held early next year.

During his visit, Patnaik also dedicated as many as 71 schools transformed under the 5T initiative in Bijepur area. He had successfully contested Assembly elections from Bijepur seat in 2019 elections.

The ongoing projects include the Gangadhar Meher Lift Irrigation Project which is expected to be completed by September 2023 to provide water to farmers.

Patnaik, who termed Bargarh as the rice bowl of Odisha, said that the district was also the sacred land of Goddess Lakshmi.

Appreciating the weavers of Bargarh who had given the world the gift of Sambalpuri sarees, Patnaik saluted the skills of the farmers and weavers of the district.

The Chief Minister had on the occasion of Independence Day celebrations this year announced to provide smart health cards under BSKY to 3.5 crore people belonging to 96 lakh families in the State.

Each family member can avail treatment cost up to Rs. 5 lakh per annum, while women members can avail this benefit up to Rs. 10 lakh every year.

Odisha is the first state in the country to have launched such a scheme in the health sector. These cards are being distributed among the beneficiaries in phases.

Beneficiaries of National and State Food Security Schemes, Annapurna, and Antyodaya beneficiaries are eligible to get this card.

The beneficiaries can avail health services in more than 200 hospital chains of the country including Odisha.

Stating that every life is precious, the Chief Minister said Odisha is the only state where the State government bears all the expenses from testing to treatment for all patients during the COVID-19 pandemic.