Six of a family killed in Odisha for alleged witchcraft

Malaya MohapatraKeonjhar, July 13: Six members of a tribal family were killed and two others were injured critically for allegedly practicing witchcraft in Lahanda Munda Sahi village under Joda police station of Keonjhar district of Odisha on Sunday night. 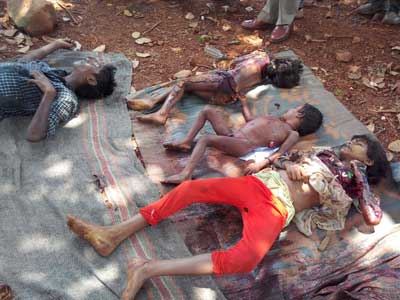 Gura Munda (46) his wife Budhuli Munda (43) and their six siblings including four sons and two daughters were attacked by a group of villagers.Six members were killed on the spot, while two others were rescued in critical condition and sent to Joda hospital for treatment.Gura Munda, his wife Budhuli, their sons Sunil, Kusanath and daughters Sombari and Namita died on the spot.Gura’s son Ganita Munda and Sambhu Munda were admitted to Joda hospital.Later Sambhu was shifted to Keonjhar district headquarters hospital for specialised treatment.On receiving information early in the morning, the Joda police reached the spot to begin their inquiry.After primary investigations, the police have nabbed Tambha Munda, the elder brother of deceased Gura for masterminding the murder.The reason of killing is due to the suspicion of witchcraft practice, a villager said.The police investigations also revealed the fact that Tambha Munda (50) had been suspecting his brother Gura for his prolonged illness and when he went for treatment to a village sorcerer he informed him that Gura had cast an evil spell on Tambha.Suspecting witch craft activities by Gura, Tambha gathered a group of supporters and planned to take revenge on his younger brother.Accordingly, a group of about six villagers led by Tambha attacked Gura and his family while they were asleep in their house in Lahanda Munda Sahi village killing six of them and two others were badly injured in the incident.The dead bodies have been sent to Champua for post mortem and police are trying to arrest the other culprits involved in the case.Meanwhile, Odisha Director General of Police Sanjeev Marik announced that the case will be investigated by a Deputy Superintendent of Police of the Crime Branch under the supervision of Keonjhar Superintendent of Police Kavita Jalan.