‘No Child Born to Die’ conclave held in Odisha 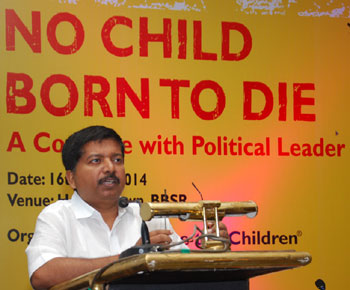 Odisha Channel Bureau Bhubaneswar, Nov 16: In every thousand live births 53 infants die in Odisha, which is higher than the national average of 42 per 1000 live births and many other states of India, according to the Sample Registration System 2012.Kick-starting the observation of “The Newborn Week” and to achieve the Millennium Development Goals (MDGs) by 2015 which aims at reducing maternal & child mortality rate by two thirds by 2015, leading international NGO ‘Save the Children’ organized a unique political conclave titled ‘No Child Born to Die’ at Bhubaneswar on Sunday. State Health and Family Welfare Minister Atanu Sabyasachi Nayak inaugurated the one of its kind conclave with unveiling of a unique Art Exhibition on Mother and Child, held with the purpose to bring a sense of urgency and trigger real action to address the issue of maternal and child health in the state.Aimed to deepen engagement with political leaders towards ending preventable maternal and child deaths, the conclave was attended by several elected people’s representatives, noted national and state level experts on maternal and child health, civil society organizations and media.Inaugurating the conclave Odisha Health & Family Welfare Minister Atanu Sabyasachi Nayak stated that in order to effectively address this issue, apart from political will, collaboration from everybody and all stakeholders is required.Informing that the state Government has planned to open more special newborn child care units (SNCU) across the state, the minister stressed that awareness and education certainly plays a bigger role in reduction of infant mortality and maternal mortality.Nayak cited the example of low IMR and MMR in states like Kerala where higher literacy rate has played a major role in addressing the issue.He also informed that the State Government is preparing to implement the plan of the central government wherein a medical team comprising doctors, paramedic staff equipped with medical facilities will travel to every school in regular intervals for health check-up and treatment.Stating that the infant mortality rate has come down significantly with the continuous efforts of the Government is working in collaboration with NGOs and social sector organizations, Nayak asserted that there is much more to be done in the coming days to further reduce IMR, NMR and MMR in the State. Though Odisha has noticeably achieved great strides in the recent years in tackling child mortality in the state and can take pride in the fact that it registered the sharpest fall in Infant Mortality Rate (IMR), the State still records high number of deaths of children, more than national average as infant mortality rate remains to be at 53 children per 1000 live births (SRS 2012).The infant mortality rate in Odisha is the second highest in the country.The majority of infant deaths take place in the first month of the child’s life as in every 1000 live births 39 Neonates are dying within 28 days of life, which is a major concern for reducing IMR in the state.To add, Maternal Mortality Ratio (MMR) in the state remains a matter of concern, it stands high at 237 compared to national figure of 178 (SRS 2012).As Save The Children believes that this silent emergency must be addressed urgently, with less that 500 days left to the MDG deadline in 2015, the Political Conclave has been held with the aim to bring a sense of urgency and trigger real action to address the issue of maternal and child health in the state.In the conclave organized to mark the beginning of observation of “The Newborn Week”, it was stressed to work together with a common purpose – to build an unstoppable momentum for a lasting change for our children.In his opening address at the conclave, Manabendra Nath Ray, Deputy Director Programme, Save the Children expressed concern over the alarming child mortality rate in the state, the key challenges ahead and the need for urgent focus and attention to improve this silent emergency.He stressed on increased focus from all stakeholders together to reduce child mortality rate especially the high number of neonates dying within weeks of life, in the state.“Save the Children acknowledges the significant efforts both by the national and state governments in prioritizing maternal and child health to achieve path-breaking reductions in the India’s child mortality levels, still we have to go a long way to reduce the IMR & MMR to a significant level,” he added.

One Response so far.