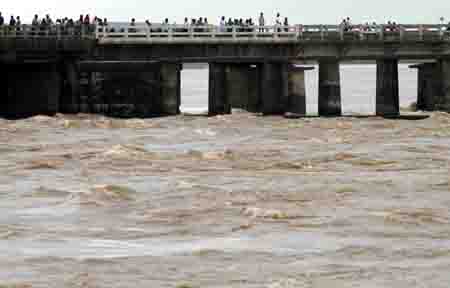 Odisha Channel Bureau Bhubaneswar, Aug 6: Even as the threat of a massive flood in the Mahanadi delta loomed large, the authorities on Wednesday opened as many as 40 gates at the Hirakud reservoir to release flood water.According to official sources, a volume of 11.5 lakh cusecs of water was likely to flow down at Mudali on Mahanadi around midnight.More sluice gates were opened as the water level at Hirakud reservoir had reached the full level of 628 ft on Wednesday.Chief Minister Naveen Patnaik visited the Flood Control Room at Rajiv Bhavan in Bhubaneswar where he was apprised of the flood situation in different regions of the State.Patnaik was informed by Secretary of Water Resources Department Suresh Mohapatra that the flood situation was under control and no major breach had occurred at any places till Wednesday noon.Mohapatra informed the Chief Minister that people were likely to be affected by the flood in Kanas and Gop areas in the Mahanadi delta.People were also likely to be badly affected in Bari and Dasarathapur areas in Jajpur district and Dhamnagar in Bhadrak district due to flood in Baitarani river, according to Special Relief Commissioner P.K.Mohapatra.The Chief Minister asked the authorities to remain alert and keep a close watch on the flood situation.Meanwhile, reports from flood-hit regions indicated that over 10 lakh people had been marooned due to the floods in Mahanadi and Baitarani rivers in districts such as Cuttack, Khurda, Nayagarh, Puri, Jajpur, Bhadrak and Kendrapara districts.Bari had been cut off from the Kuakhia side as flood water was flowing over the road since Tuesday night.