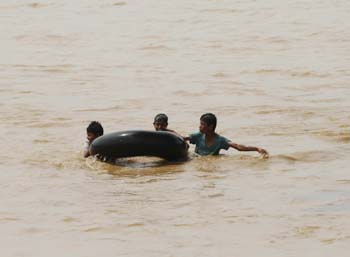 Odisha Channel Bureau Bhubaneswar, Aug 7: Several districts in Mahanadi delta region in Odisha experienced flood on Thursday after more than 11 lakh cusecs of water was released at Mundali barrage in the wee hours of the day.Even as hundreds of villages were marooned in Cuttack, Puri, Jagatsinghpur and Kendrapara as a result, the Water Resources Department officials claimed that here was no possibility of a high flood in the region over the next few days.The situation was bad in Kanasa and Gop area of Puri districts with the small rivers in the region flowing over the danger level during the day.Secretary of Water Resources Department Suresh Mohapatra told journalists that no high flood in the Mahanadi delta was expected since no heavy rainfall was likely to occur in the upper catchment of Hirakud reservoir.Mohapatra, however, said that the flood situation will continue in the coastal districts that had already been affected by floods till next week. 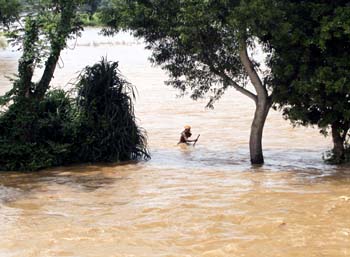 Meanwhile, the authorities closed three sluice gates at Hirakud reservoir on Thursday afternoon though water was being released through 47 gates.A total of 50 gates had been opened in Wednesday.The flood situation was likely to remain unchanged in Puri, Cuttack, Jagatsinghpur and Kendrapara as around 10 lakh cusecs of flood water was likely to flow down at Mundali for the next three/four days as water was being released from Hirakud.On the other hand, flood situation continued to remain grim in Jajpur, Bhadrak and Balasore districts even though water level in Baitarani, Budhabalanga and Salandi started decreasing on Thursday.Hundreds of villages were still marooned and the administration was not being reach to the flood victims primarily due to shortage of boats.