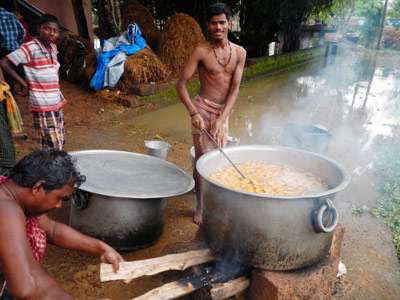 Odisha Channel Bureau Bhubaneswar, Aug 10: Even though the Naveen Patnaik Government attached little importance to the plight of the millions flood affected people, the death toll due to floods in Odisha climbed to 45 on Sunday.State Government said that the number of people affected by the floods had increased to over 32.9 lakh.The situation, however, had started improving gradually with flood water receding in many areas.More than 4.8 lakh people hundreds of villages were still left marooned in the districts of Puri, Jajpur, Jagatsinghpur, Kendrapara, Cuttack and Bhadrak, the Government said in an official statement in the evening.The death toll in floods and heavy rains in different parts of the State climbed to 45, eight more from 37 on Saturday, according to the officials of the State Government’s Revenue and Disaster Management Department.While 15 persons were killed in the first phase of floods that month, the current round of floods in the Mahanadi, Baitarani and many other rivers had claimed 30 lives in several districts.The highest number of 10 deaths was recorded from Bargarh district, while eight deaths were reported from Mayurbhanj and five each were reported from Sambalpur and Bhadrak.

Strangely, the State government did not use helicopters to airdrop relief materials to the lakhs of people who were surrounded by flood water for the past several days.The State government did not take any initiative even though Union Home Minister Rajnath Singh had spoken to Chief Minister Naveen Patnaik over the phone several days ago and assured all help from the Centre.Meanwhile, the water level was receding in almost all the flooded rivers and the flood situation was likely to improve over the next few days.