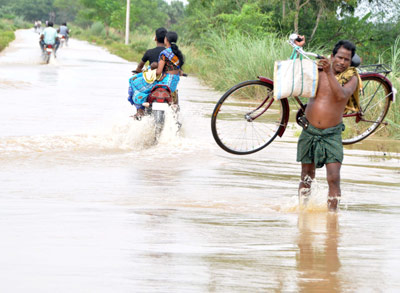 Odisha Channel Bureau Bhubaneswar, Aug 16: Prime Minister Narendra Modi has expressed grief over the loss of lives in the recent floods in Odisha and announced ex-gratia from the Prime Minister’s National Relief Fund.The Prime Minister has sanctioned Rs.2 lakh each for the deceased and Rs.50,000 each for the seriously injured, according to an official release issued by the Press Information Bureau on Saturday.The amount will be disbursed directly to the District Collectors, the release said.The Prime Minister spoke to Minister for Petroleum and Natural Gas Dharmendra Pradhan and sought information on the situation arising out of the floods.At least 46 persons were killed due to heavy rains and consequent floods in the State.While 15 persons were killed in the first phase, more than 30 people were killed in the floods during the past few weeks.The situation was turning normal in the coastal districts where floods in Mahanadi, Baitarani and other rivers had affected millions of the people.