Artist decries killing of US journalist 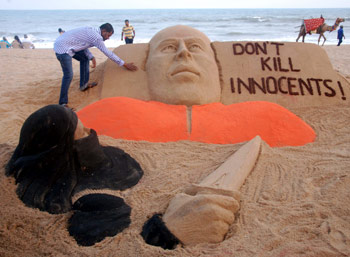 Odisha Channel Bureau Puri, Aug 21: Well-know sand artist Sudarsan Pattnaik on Thursday created a sand sculpture on the issue of US journalist killed by ISIS terrorist in Iraq, with a message `Don’t kill innocents’ on Puri beach in the Eastern Indian State of Odisha.“I want to appeal the terrorists through my sand art that to don’t killed the innocents and try to solve their demands by discussion,” Pattnaik said in a statement.He created a 5ft high sand sculpture by showing the face of US journalist who was killed by the masked terrorists.He used about four tonnes of sand to create the sculpture.So far Pattnaik has participated in more than 50 International sand sculpture championships and festivals around the world and won many prizes for the country.US journalist James Foley was killed on Tuesday purportedly in revenge for US air strikes in Iraq.