Odisha has potential to be a manufacturing hub: Sitharaman 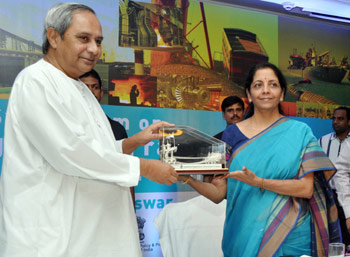 Odisha Channel Bureau Bhubaneswar, Aug 22: Odisha having large mineral resources has potentiality for manufacturing hub in Eastern India, Union Minister of Commerce and Industry Nirmala Sitharaman said here on Friday.Talking to the media at the Bharatiya Janata Party State headquarters here, Sitharaman said that Union Government has declared Kolkata-Visakhapatnam-Chennai industrial corridor in the new industrial policy, and Bhubaneswar shall be `Knowledge Centre’ for skill development of this industrial corridor.Earlier, she inaugurated a national symposium on `manufacturing and best practices to improve business environment’ in the city where she lauded the progress made by Odisha in manufacturing and industrial sector.Odisha was silently and steadily contributing towards national economy, she said.She said that 40 per cent of the GDP component of Odisha comes from manufacturing industries and needs to be boosted.Manufacturing industries will also have large scope of employment generation, the Union Minister said, while adding that students after completing their education will get employment in this industrial corridor.Sitharaman also urged the party members and social workers to popularise the PM Jana Dhana Yojana among large number of rural inhabitants without bank account.In this plan, the beneficiary shall get overdraft facilities, financial support and insurance of one lakh rupees.Oil and Petroleum Minister Dharmendra Pradhan, who was present at the press conference, said that Odisha would be gainer because of Central Government’s decision to enhance royalty on mining royalty.Chief Minister Naveen Patnaik, also spoke at the inaugural session of the symposium.Odisha is a leading State in mineral processing, Mr.Patnaik said, while adding that the State has seen phenomenal growth in primary metal making, power generation, and infrastructure capacity augmentation during the last decade.The Chief Minister further said that there was ample scope for improvement and adoption of new practices.The symposium was jointly organised by Odisha Government’s Industries Department, and Department of Industrial Policy and Promotion, Government of India.