SUP Boarding to be introduced in Chilika

Odisha Channel Bureau Bhubaneswar, Aug 25: Department of Tourism, Government of Odisha has drawn up plan to introduce Stand Up Paddle (SUP) Boarding, a water support and island hopping in the magnificent Chilika lake to further attract domestic as well as international tourists across the globe.“Stand Up Paddleboarding, which is referred as SUP and has become one of the most popular water sports across the world, surfing will be arriving in Chilika lake. 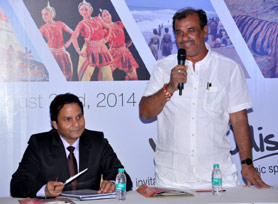 “Sea and sun lovers all over the world will be able to jump the proverbial bandwagon, which is surfboard soon and enjoy the Chilika lagoon with its tranquil bearing and wide diversity of wildlife including the famous Irrawaddy dolphins, thousands of species of migratory birds and abundance of marine life,” informed Ashok Chandra Panda, Odisha Tourism Minister while speaking at the Odisha Tourism Road Show in Pune on late Saturday evening.“Chilika lake can emerge the most preferred exotic location for international SUP enthusiasts.A recent study undertaken by a leading SUP promotion and training organisation of UK, and Surfing Yogis organisation of Odisha has, in fact, found the lake safer than river Thames, sans any significant current or obstructions where paddlers could potentially be pinned.“The lake averages depth of about five feet in most parts with exceptions of some locations where depth is up to 15 feet.The water is mostly calm and flat, particularly in the morning, which is ideal for relaxed paddling and for teaching beginners” said Panda.“Chilika provides a similar experience to open ocean paddling but with significantly lower risks.The Eastern Ghats lend a dramatic backdrop for paddling and lake is dotted by scenic islands and historical landmarks like the 19th century British Tax Collection point building.Keeping in mind various islands in Chilika lake, the Government also plans to add Island Hopping as part of further promoting tourism in the state,” added Panda.Ödisha Tourism also plans to add two new Tourism circuits in Odisha on the lines of Bhubaneswar-Puri-Konark golden triangle.These two new tourism circuits are Kuldiha-Similipal-Bhitarkanika-Panchlingeswar-Chandipur-Talsari circuit and Malkangiri-Jeypore-Nabarangpur-Koraput-Rayagada-Daringibadi-Chandragiri-Taptapani circuit,” said Manoranjan Patnaik, Director of Tourism, Odisha Government.“Construction of wayside amenities, budget accommodations, public toilets, drinking water and tourist information centres at locations under the two circuits shall be undertaken under the project in PPP mode,” said Patnaik.Odisha Tourism to attract domestic tourists from various parts of the country is holding road shows in different cities starting from Pune.The next road show will be held in Bhopal in September.It has already organised five road shows last year and has planned to organise eight road shows this year.