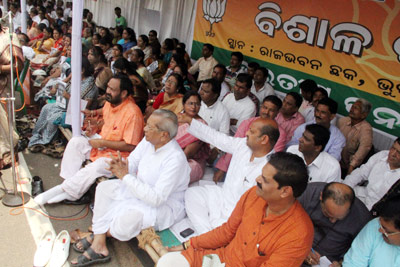 The party alleged that the massive land scam had taken place in the full knowledge and concurrence of the Chief Minister.A delegation of the party leaders later submitted a memorandum to Governor S.C.Jamir requesting him to ask the State Government to hand over the land scam cases to the CBI.The allotments made during Mr.Patnaik’s rule since March 2000 should be probed by the CBI, the BJP demanded.Senior leader Bijoy Mohapatra, who has been in the forefront in taking up the land scam issue, announced that the agitation would continue across the State till their demand for a CBI probe into the scam is conceded.In the memorandum, the party alleged that several BJD leaders had fraudulently grabbed about 200 acres of forest land and land belonging to departments of Revenue, General Administration and Bhubaneswar Development Authority (BDA) and obtained documents as owners of the land in question.The matter should be probed and the culprits should be brought to book, the BJP demanded.In spite of Orissa High Court’s order in the year 2002 to formulate a suitable policy for land allotment, the State Government is sitting on the decision conveniently and nonchalantly for the last 12 years now, the party said in the memorandum addressed to Jamir.“This has fuelled corruption and massive loss of revenue to the State exchequer.The inaction has also resulted in the flourishing of huge set of land-grabbers in the State who are out to grab all sorts of land in connivance with the administration.“The so-called `Task-force’, comprising of serving Bureau crats to inquire into the matter by the government, is nothing but a sham and just an “eye-wash” by the Chief Minister to justify the crime committed and to perpetuate the misdeeds.“We strongly feel that such inquiry will not yield any result whatsoever, as experienced earlier on several other occasions,” the party said.