Odisha Channel Bureau Bhubaneswar, Aug 28: The mining lobby that had succeeded in restraining the Naveen Patnaik Government and the erstwhile Manmohan Singh Government from ordering a CBI probe into the Odisha mining scam seems to have been successful in making the Narendra Modi Government not to act upon the Shah Commission report.This became evident when Union Steel and Mines Minister Narendra Singh Tomar and Union Steel and Mines secretary Anup Kumar Pujari told journalists here on Wednesday that they were not against the Odisha Government’s approach of getting the mining scam probed by the State Vigilance Department. 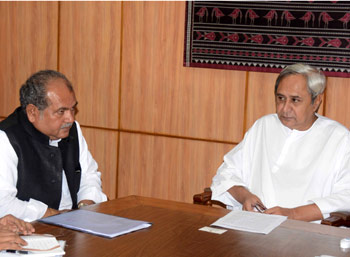 “The Narendra Modi Government will respect the State government’s decision on the vigilance inquiry into the mining scam,” Tomar told journalists at a press conference here hours after his meeting with Chief Minister Naveen Patnaik at the State Secretariat.The demand for a CBI probe into the mining scam was being strongly made by many opposition parties, including the Odisha unit of Bharatiya Janata Party, after the Shah Commission report was placed in Parliament along with the action taken report.The Commission has strongly recommended that the scam be handed over to the CBI for probe.Pujari said that while Shah Commission had recommended a CBI inquiry into the illegal mining, the Odisha government in its action taken report has stated that there is no need for a CBI inquiry as it is already investigating the matter.Those who were demanding for a CBI inquiry into the scam are now pinning hope on the Supreme Court which is hearing a few petitions seeking CBI probe into the large scale illegal mining that had taken place in Odisha for a long years.