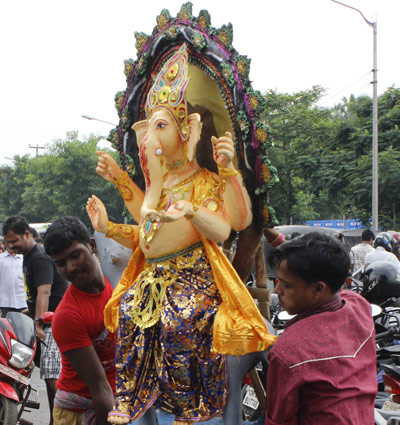 Odisha Channel Bureau Bhubaneswar, Aug 29: Ganesha Chaturthi, the festival marking the birth of Lord Ganesha, was celebrated with traditional fervour and gaiety across Odisha on Friday.The idols of Ganesha in different shapes and sizes were worshipped at hundreds of educational institutions, pandals at innumerable places and different temples.Like many other States in the country, Ganesha Chaturthi is one of the most important festivals in Odisha and is celebrated in most of the major towns of the State in a big way.As in previous years, the idols of Ganesha is being worshipped for three to five days at different pandals in Bhubaneswar, Cuttack, Berhampur, Bhadrak and many other towns with hundreds of people joining the celebration to offer prayers.More than 100 pandals have erected huge mandaps and tableaus for the festival in the Capital city alone.A 35ft Ganesha idol has been installed at one of the pandals in Saheed Nagar locality of the Capital city.Similar has been the atmosphere in neighbouring Cuttack where many Ganesha puja pandals were decorated in a grand way with Many pandals have been made in the shape of replicas of different monuments, temple in the Millennium City and tall arches have been erected to welcome attract people.Similar festive spirit also gripped Berhampur, Bhadrak, Paradip and many other places where people began celebrating the annual Ganesha puja.