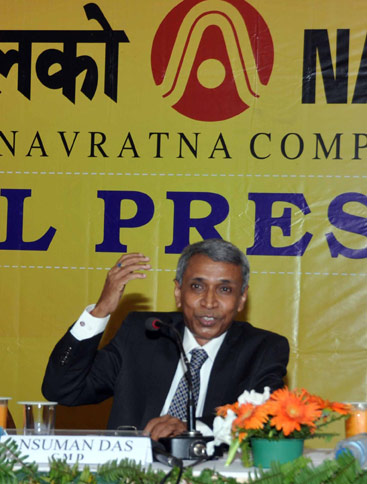 Odisha Channel Bureau Bhubaneswar, Sep 27: In their 33rd Annual General Meeting held here on Saturday, the shareholders of National Aluminium Company Limited (NALCO), a Navratna PSU under Ministry of Mines, Government of India, have approved a total dividend payout of 30%, which works out to Rs.1.50 per share.The total pay-out is Rs.387 crore for 2013-14.Since inception, NALCO has paid a total of Rs.4906 crore as dividend, including Rs.4234 crore as share of Government of India.Following the Annual General Meeting, Ansuman Das, CMD of NALCO addressed the media persons and highlighted the performance of the company and its growth plans.“With a view to achieve sustainable development, NALCO has begun a new odyssey to conquer the challenges of present and the threats of future.After 33 years of operations, the company is now focusing to move forward through further expansions, diversifications, and thereby enhance sustainability coupled with stakeholders’ satisfaction,” he said.Peripheral Development and environment protection has been given additional thrust, Das added.He further said that the company is currently embarking upon an ambitious growth plan, which involves a substantial investment in next 3 to 4 years, not only in aluminium sector, but also in energy sector.This will give a significant boost to NALCO’s productivity and profitability.Continuing with its self-propelled growth, the company has completed the up-gradation of 4th Stream of Alumina Refinery leading to capacity increase from 21 lakh TPY to 22.75 lakh TPY and that of Bauxite Mines from 6.3 Million TPY to 6.825 Million TPY at an estimated project cost of Rs.400 crore approximately.As part of its green initiatives, the company has also commissioned of 47.6 MW Wind Power Project II at Jaisalmer, Rajasthan at an investment of Rs.283 crore.The first Wind Power Plant of 50.4 MW in Andhra Pradesh was commissioned in 2012-13.About 150 million units of electricity was generated from these two plants, in 2013-14.In another step to harness alternative energy sources, the company has commissioned rooftop solar system at Corporate Office building (160 kwp) and also installed rooftop solar system in township buildings (100 kwp) at Bhubaneswar.Looking Beyond the Existing ResourcesWhile the efforts are on to make profit and maintain a successful track record as a Navratna in the aluminium sector, NALCO is now looking beyond its core operations, with a view to achieve a new level of corporate distinction. Some of these initiatives are:• Alumina Refinery Project in Gujarat: NALCO has been pursuing to set up 1 MTPA alumina refinery in Kutch district of Gujarat based on supply of bauxite from GMDC’s mines, for which Detailed Project Report (DPR) for the project has already been prepared.The project is likely to be taken up in JV, for which GMDC has been approached.• 2nd Smelter and CPP in Odisha: A Smelter & Power complex has been envisaged to come up at Sundargarh, Odisha has also received clearance of State Govt.To make it viable, the company is trying for coal block allocation.• Caustic Soda Project: The company plans to set up a 2 Lakh TPA caustic soda plant at Dahej in Gujarat at an estimated investment of Rs.950 crore in JV with GACL for which the Detailed Project Report (DPR) is under review.• Aluminium and Aluminium Alloy Conductor Plant: The company has plans to set up aluminium and aluminium alloy conductors for which the Techno-economic Feasibility Report (TEFR) has been made.Govt.of Odisha has made in-principle allocation of 30 acres of land in the Angul Aluminium Park.• Overseas Smelter: The company is exploring the opportunity to set up a Greenfield aluminium smelter in a country where energy would be available at a competitive price to make the project viable.As of now, 5 countries have been short listed considering various factors like shipping distance from India, availability of required quantum of energy and price viability, geo-political scenario, availability of infrastructure etc.Indian Embassies of the identified countries have been approached for necessary data/information.A consultant is being appointed shortly for ascertaining the best possible destination for the project.• 14 MW Wind Power Plant at Damanjodi: The company is planning to set up a 14 MW wind power project in mined out area of its bauxite mines in Damanjodi.Detailed Feasibility Report (DFR) has been prepared.• 100 MW Wind Power Plant: The company also plans to set up 100MW wind power project at a suitable location in India.Selection of wind power developer is underway.• Solar Power Project: The company plans to set up a solar power plant of appropriate capacity at a suitable location in India to meet its solar renewable purchase obligation (RPO).• Rooftop Solar Power Project: The company is also undertaking feasibility study to establish ground mounted and rooftop solar power project at the NALCO Research & Technology Centre (NRTC) at Bhubaneswar as well as at Smleter and Township at Angul, according to an official release.