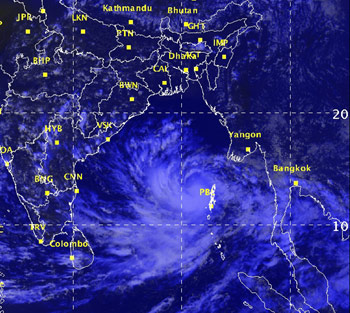 Odisha Channel Bureau Bhubaneswar, Oct 8: Panic buying of essential commodities continued across coastal Odisha on Wednesday as news spread about the deep depression, named storm Hud Hud, over the over north Andaman Sea intensified into a cyclonic storm.The deep depression, which crossed the Andaman & Nicobar Islands close to the Long Island around noon, was likely to continue to move west-northwestwards and intensify into a severe cyclonic storm during the next 24 hours.Subsequently, it was likely to intensify into a very severe cyclonic storm and cross north Andhra Pradesh and adjoining Odisha between Visakhapatnam and Gopalpur by October 12 noon.The storm was likely to affect the districts of Puri, Khurda, Ganjam and Gajapati in Odisha and some coastal districts of Andhra Pradesh.The wind speed of Hud Hud may reach up to 155 km per hour when it would hit the coast between Gopalpur and Visakhapatnam.Meanwhile, Chief Minister Naveen Patnaik said that preparations were in place to meet any eventuality arising out of the possible cyclone hitting the State.“I reviewed the possible cyclonic storm situation with all the concerned departments.All preparations have been made to meet the situation.All departments have been asked to prepare contingency plan to meet the situation,” Patnaik said after chairing a high level meeting at the State Secretariat here to review the Odisha’s preparedness for the impending storm.Since panic buying of essential items continued in the coastal districts and potato virtually vanished from the market, the State Government asked the people not to resort to panic buying.