By Mona Lisa JenaOdisha is truly blessed with sea beaches, a long coast line entertains its visitors in several ways, somewhere there are ports, somewhere fishing communities, somewhere you get totally lost in the maze of a crowd and yet the beach can be clean, secluded, romantic and quiet too, like Chandrabhaga. 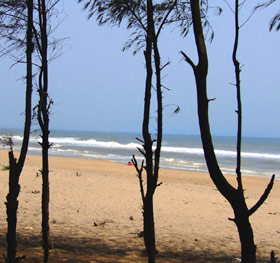 Chandrabhaga beach lies on the Marine Drive from Puri to Konark.Miles of casuarinas jungles shield the blue surfing sea and gives delightful openings for the passers-by to stop and admire the sea.The road goes through the Balukhand sanctuary that also abounds with small and attractive swamp deer, called Baliharina and other deer species.The rustling of the breeze through the casuarinas is the only sound that is heard apart from the wave after wave that come with a resonance.Here there are no hawkers troubling you for your money selling sea products, pearls, shells or eatables too much.No clutter too in the shape of empty bottles, plastic pouches or dirty streaks of running water from nearby hotels.For there are no habitation close to the sea shore.The vehicles that drive through the sanctuary on the Marine Drive are barred from blowing their horns.So no distraction, no pollution on that score as well.At Chandrabhaga, sunsets are truly a delightful experience altogether.The pearly sands warm up to the gently falling glow and the waves dazzle with a diamond of rainbow hues on their head.The sky turns into a vast canvas for the swift strokes for the inimitable paintings.One can simply stay on like that without any conversation.Chandrabhaga Beach is located three kilometers from the famous Sun temple at Konark.It has significance as a pilgrim center.Every year in February, during the auspicious Magha Saptami day, lakhs of believers throng this beach for a dip in the Bay of Bengal at day break, to worship the Sun as a deity on his birthday and also to pay homage to their ancestors.There is a legend connected with the place.There lived a saint named Sumanyu on the seashore.He had adopted a girl and she turned out to be an exquisitely beautiful woman.There was a river called Chitrotpala nearby where she went to bathe with her friends.Once, the Sun God spotted her and was enamored by her ravishing beauty.He became extremely impatient to get her hand as his consort, and came in the guise of a Brahmin and expressed his desire to her.The girl spurned his offer and recognized him as Surya, Himself.She tried to escape and when she could not run away she jumped into the sea.When Sumanyu heard this he became enraged and cursed the deity that the holy temple that was being erected at Konark would be defiled and that the devotees never worship him in any temple but only in the open on a sea beach.Since Chandrabhaga committed suicide on the Magha Saptami, the day is observed as holy and devotees throng here.The gathering is called Chandrabhaga Mela in her honour.Chitrotpala River too was renamed as Chandrabhaga which has shrunk to a small sacred tank now.There is another legend that says that there was a demon called Arka and Surya was troubled by him in the nearby Maitreya forests.On this day they had a duel here and finally Lord Surya killed the demon.The day is thus sacred and after a dip in the Chandrabhaga and the sea one offers prayers to the deity here.The place is called Arka Kshetra for that reason.There is also a legend about Samba, the son of Krishna , who was cursed by his father and was rendered ugly.Samba was advised by Narada to come here in penitence and worship Lord Surya every day by standing waist deep in the water and meditate in the cool climate of the Maitreya vana.He did so for 12 years and finally the Sun was pleased and restored his lost looks.Since Samba sat in Padmashana (legs folded inward and arms on the knees) when he meditated here, the place is also called Padma Kshetra.On this day, the sun begins his north ward journey and looks most beautiful.Surya is believed to be another form of Lord Vishnu and like the latter the Sun moves swiftly.Vishnu has 360 names to justify the days in a year.There are several sites of interests as well like the temple of Baliharachandi where the sand dunes through the emerald waters of the sea are a fit sight for a picture post card.There are ruins of Buddhist monuments as well.But this is certainly a blissful place to relax and unwind being so close to the city and yet so distant for its ambience.