By Rajkumar Mohanty
Puri, the abode of Lord Jagannath, is bestowed with many natural bounties including a vast stretch of sandy beach. The city’s 10-km-long beach is famous for its golden sand. Tourists throng the beach for sea surfing and sun bathing. 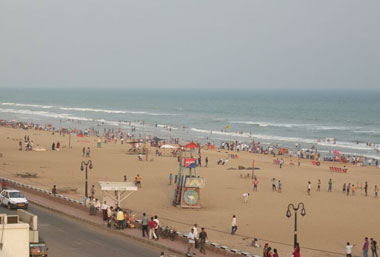 This apart the beach has a unique religious character. Noted sage Aadi Shanker had described the city as Purushottam Kshetra, Goddess Vimala as Pitheswari, and the sea as Mahodadhi tirth. About three km stretch of the sea beach from Swargdwar to Chakratirth is known as Mahodadhi where devotees of Hindu faith perform rituals for their ancestors during the month long Kartik brata. They place holy basil tree on the beach, take a holy dip in the sea and offer prayers to the sun god.Ancient sages had established the temple of Hanuman popularly known as Daria Mahavir at the eastern end to prevent the landward advancement of the sea.

The offerings and special rituals were observed for Varuna, the king of sea as well as father of Devi Mahalaxmi, to protect this holy city which was home to his daughter. On the western end of the beach near Swargdwar three most powerful deities Smasan Kali, Annapurna and Lord Shiva are worshipped. They act as guardians of the beach since time immemorial.

A portion of this beach as per religious texts has been identified as Swargadwar, gateway to heaven. Every day bodies of hundreds of people from across the state are brought here and consigned to flames. The belief goes that whoever gets cremated at Swargdwar goes to heaven.

The annual Rath Yatra of Lord Jagannath, during June-July, is the major religious festival of the city when lakhs of devotees from different parts of the world throng the place to witness the unique event on the Grand road between Sri Jagannath temple and Gundicha temple.

The entire coastline of the city is dotted with various types of hotels and holiday homes.There are more than 700 hotels, guesthouses and holiday homes along the coastline.Most of these have come up in the recent years. Unlike other beaches, Puri beach is full of activity round the year. While it becomes venue to many mega musical extravaganzas in the spring season, during the holy months it serves as tirth and a lot of pilgrim movement is noticed.

Children get enthralled over the camel and horse rides besides the amusement and playing facilities. Besides, fishing remains the oldest and most sustainable activity on the beach. Scores of sea faring fishermen called Nolias depend upon the sea for their livelihood. Activities like landing of fish from the boats, docking the boats on beach when not in use and its repairing present pleasant scene.

Visitors get enchanted to witness the sunrise and sunset on the horizon. With a boost in the hospitality industry many negative effects on the beach was noticed. While the hotels cater to the needs of the visitors they too pollute the beach by releasing untreated waste water and dumping solid waste on the beach.

The administration, however, has taken a series of measures to prevent pollution of the beach and the sea water. Closure notices were slapped on a number of hotels and other commercial establishments located along the beach while efforts were on to beautify the beach by developing a rose garden, a number of modern parking lots and provision for creation of basic amenities along the beach dedicated for the visitors.