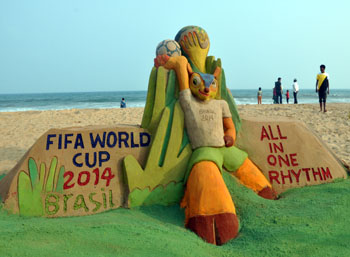 Odisha Channel Bureau Bhubaneswar: Well-known sand artist Manas Kumar Sahoo has created a sand sculpture at the sea beach of Puri to celebrate the opening of 2014 FIFA World Cup.The FIFA World Cup, often simply the World Cup, is an international association football competition contested by the senior men’s national teams of the members of Federation Internationale de Football Association (FIFA), the sport’s global governing body.The championship has been awarded every four years since the inaugural tournament in 1930.The current champions are Spain, who won the 2010 tournament in South Africa.The 2014 FIFA World Cup will be hosted by Brazil, the first held in South America since 1978.It is scheduled to take place from June 12 July 13, and 32 countries are participating in this competition.It will be the second time that Brazil has hosted the competition.In view of the worldwide celebration, Sahoo carved a beautiful sand sculpture that indicates unity, harmony and brotherhood of all the countries.In this sculpture he shows a foot ball, mascot and the FIFA world cup.By creating the sculpture the artist also wants to spread the message `All in one rhythm’, the official slogan of the 2014 World Cup.