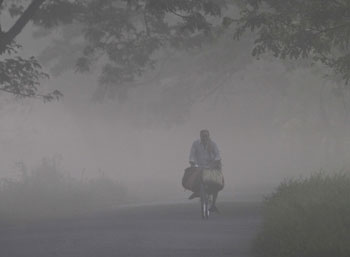 Odisha Channel Bureau Bhubaneswar, Dec 29: Even as cold wave condition continues to prevail across Odisha, bad weather is likely to mar the New Year festivities in the State.Rain is likely to occur in the State under the influence of a well marked low pressure area over southwest Bay of Bengal off Sri Lanka coast that lies over southwest Bay of Bengal off north Sri Lanka-Tamil Nadu coast.The system could concentrate into depression during next 24 hours, according to the India Meteorological Centre.Rain or thundershower would occur at a few places over coastal Odisha and at isolated places over interior Odisha during the next 24 hours, the Bhubaneswar Meteorological Centre said today.The Centre has made similar forecast for December 31 and January 1, the New Year Day.There will be decrease in rainfall from January 2, according to the Centre.India Meteorological Centre also predicted that heavy rainfall would occur at isolated places over coastal Odisha and north coastal Andhra Pradesh on December 31.On the other hand, as the sky continued to remain cloudy it being the harvesting season the famers are working hard to save their paddy crop from the impending rain.