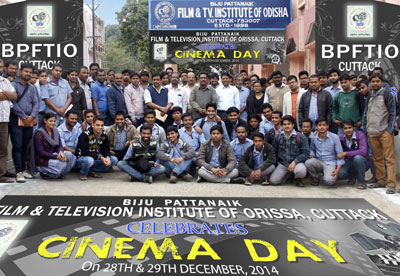 Odisha Channel Bureau Cuttack, Dec 29: Cinema Day was celebrated in the auditorium of Biju Patnaik Film and Television Institute of Odisha (BPFTIO) on Sunday and Monday.The event was organised remembering the Lumiere Brothers first private screening of projected motion pictures in 1895 for the masses.Their first public screening of films at which admission was charged was held on December 28, 1895 at the Salon Indien du Grand Café in Paris.This is the tradition of observing the Cinema Day on December 28 at BPFTIO at Cuttack only.The objective of this grand celebration is to create awareness about the importance of the day as well as among the film aspirants to make good cinema.The cinema day gives a bunch of inspiration to the new growing buds who wants to make career in film making.Some of the classic cinemas of Odisha – Maya Miriga, Kathantara , Nila Mastrani, Puja Pain Phulatie, Aa Akare Aaa; documentaries – Jyotshna, A Tree A man A see, Dragon Fly & A Snake, Yatra Jiban Jiban Yatra, and short film such as Prayas were screened during the two-day celebrations and analysed among the experts and cinema students and lovers.This platform has given a great opportunity to the students of BPFTIO to see these films and to interact heart to heart with the great film personalities.The attempt of creating a tradition of celebrating Cinema Day has been appreciated not only by the print and electronic media but also cinema lovers and other general viewers.