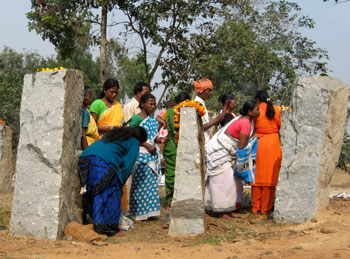 Rajashree DashJajpur, Jan 2: Hundreds of tribal men and women from Odisha and outside on Friday gathered at Kalinga Nagar to observe the ninth anniversary of the police firing which killed 14 tribals, including three women.Over 2000 tribals both from locals and different organisations across the State and beyond led by Visthapan Virodhi Jan Manch (VVJM), the outfit that has been spreading anti industrialisation movement in Kalinga Nagar firing took out a rally from the Champakoila, the spot where the tribals were killed in police firing on January 2, 2006.Later, the rally moved across the area through Duburi Chhak and reached the Veerbhumi, where the deceased were mass cremated.Finally, the tribals organised a protest meeting at Ambagadia which was attended by many anti-displacement activists.The leaders at the protest meeting vowed to fight any policy that exploits the locals.VVJM said it would continue its agitation against displacement due to industrialisation in Kalinga Nagar.“We have been agitating for the protection of Jal, Jungle and Jamin (water, forest and land) in Kalinga Nagar.We are fighting for the cause of the tribals and our agitation will continue,” said Rabindra Jarika, secretary of VVJM.Nine years ago, the police had fired on tribals protesting against displacement due to industrialisation in general and leveling the ground for the construction of a boundary wall by the Tata Steel for its six million tonnes steel plant at Kalinga Nagar.While twelve tribals were killed on the spot, as many as 60 protestors sustained bullet injuries.Later, two of the injured succumbed to their injuries during treatment.A police constable was also killed in the clash.On the other hand, Bisthapita Parivar Unnayana Parisad, a pro-Tata outfit today observed the 9th Shradhanjali Diwas in memory of those killed in the firing at Gobarghati colony in Kalinga Nagar.They also organised a meeting which was attended eminent social activist and tribal leader Tulasi Munda.Four platoons of armed police force, 12 police officials, two DSPs, and two Magistrates were deployed in Kalinga Nagar during the day to maintain law and order.