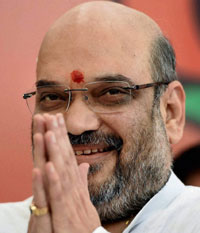 Odisha Channel Bureau Bhubaneswar, Jan 6: BJP national president Amir Shah today urged the people of Odisha support his party to form government in the State.The process of eradication of poverty could be fastened if the BJP is voter to power in Odisha, said Shah, while addressing the Mahasangram rally organised by the Odisha unit of BJP Odisha here.The BJP president urged the party workers to reach out to all sections of the people across the State and convince them to join the Vikas Yatra started by Prime Minister Narendra Modi.He also announced the telephone number – 18002662020 and urged the people to become members of the BJP by just dialing the same.Shah urged the people of Odisha to join Narendra Modi’s development journey in order to make the State emerge as the No 1 State of the country.“The entire country should know that BJP is going to form government Odisha,” Shah said while urging the gathering to join him is raising the slogan `Bharat Mata Ki Jai’.Shah also highlighted the Centre decision to allow the State governments to auction of mines through competitive bidding.This decision would benefit such as Odisha and Jharkhand the most, he added.Attacking the Congress, Shah said the UPA government had failed to control price rise and bring down fuel prices during its decade-long rule.Narendra Modi Government has been able to do this in just seven months, he added.He also highlighted Modi Government’s achievements by talking about the Jan Dhan Yojana, adoption of model villages by Parliament Members and other schemes and initiatives.The Modi Government has also taken measures to fight the problem of unemployment by launching the `Make in India’ initiative, he added.The State BJP leaders who addressed the meeting include senior leaders Bijoy Mohapatra and Biswabhushan Harichandan, State BJP president Kanak Vardhan Singh Deo, Union Ministers Jual Oram and Dharmendra Pradhan.The State leaders of the party urged the people to launch a statewide movement against the Naveen Patnaik Government. Branding the BJD government corrupt, the leaders urged the people to highlight the achievements of the Narendra Modi Government and expose the misrule of the Naveen Patnaik.Several national level leaders of the party also were present at the rally which attracted BJP supporters from all parts of the State.All roads leading to the venue were choked as thousands of people came in processions from all sides.