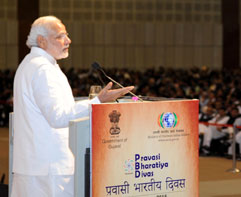 Odisha Channel Bureau Bhubaneswar, Jan 8: Prime Minister Narendra Modi today called upon the Indian diaspora across the world to unite as a positive global force in the cause of humanity.In his inaugural address at the Pravasi Bharatiya Diwas at the Mahatma Mandir in Gandhinagar, the Prime Minister recalled that exactly 100 years ago, a Non Resident Indian – Gandhi – had returned to India to serve the people.Today, he said, he was welcoming NRIs from across the world as a non resident Gujarati.Modi said NRIs are present across the world, in more than 200 countries.“India is global because of you,” he told the gathering.He said that in the past, Indians had travelled across the world in search of opportunity, or to gain knowledge and exposure.“Today, opportunities beckon you in India,” he asserted, adding that today, the world looks at India with hope.He said times are changing quickly, and India is rising with great strength.According to an official release issued by the PIB, Modi exhorted the Indian diaspora to contribute to India’s success in any way possible, including knowledge, expertise or skills.He mentioned in particular, the Namaami Gange project to clean the River Ganga, and make it a source of economic empowerment for 40 percent of India’s population.He said he was sure all NRIs would be inspired to contribute to this cause.Modi welcomed the dignitaries from Guyana, South Africa and Mauritius.He recalled how Indian festivals such as Holi and Diwali are enthusiastically celebrated in Guyana.He recalled that today – January 8 – was the founding day of the African National Congress in South Africa.He mentioned that Mahatma Gandhi’s birth anniversary – October 2 – is observed in Mauritius with even greater vigour than it is observed in India.He called upon NRIs across the world to forge and take pride in a common identity and heritage, and to use this strength collectively.He said even if a solitary NRI is present anywhere in the world, India is alive and present in that corner of the world through him.He said he had met representatives of 50 countries since assuming office, and he could say with confidence that rich or poor, all nations across the world, today feel that their goals and objectives can be met in partnership with India.He said this was a rare opportunity, and it was now up to everyone to use this opportunity for the benefit of humanity, and for India’s benefit.He said the world was showering affection on India, as was evident from the fact that a record 177 nations out of 193, had co-sponsored India’s resolution on International Day of Yoga at the United Nations.Modi said he firmly believes that NRIs are a big strength of India, and India can make a global impact by reaching out to them.He also announced that he had fulfilled all promises made to NRIs, such as lifelong visa for PIO cardholders, merging of PIO and OCI schemes, visa on arrival for 43 countries, and electronic travel authorisation.