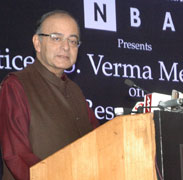 Odisha Channel Bureau New Delhi, Jan 18: The conventional contours of the issues pertaining to freedom and responsibility of media have changed in the last two decades due to changes in the nature and content of media and the definition of news, Union Minister of Finance, Corporate Affairs and Information & Broadcasting Arun Jaitley has said.News in the electronic media today was being defined by what the camera could capture, said Jaitley while delivering the delivering the first Justice J.S.Verma Memorial lecture on the ‘Freedom & Responsibility of Media’ organised by the News Broadcasters Association here today.In the current paradigm, technology had become a driving force for these changes, and the impact of technology was profound as information dissemination was taking place 24×7 across different technological tools and media platforms including the digital space, he stated.Elaborating further, Jaitley said technological developments had defied the contours of censorship and the challenges for the media lay within, in the context of ownership patterns, financial sustainability and financial models which led to aberrations such as paid news.The Minister further stated that the challenge before media was to ensure quality, credibility along with the responsibility to play the role of an educator in handling sensitive issues.The challenge also lay in maintaining high ethical standards on the issue of conflict of interest where media needed to be very careful, he added.Regarding digital media, Jaitley said the financial models would evolve as the medium matured.The digital platform also needed to evolve its own standards of responsibility as it had emerged as an alternative platform for information dissemination.The Minister further mentioned that media responsibility was critical in addressing matters related to security, social tension, privacy of the individual and the issues that involved a sub judice connotation.Media needed to avoid the conduct of parallel trials in reporting matters that were sub judice, Jaitley said, while mentioning that constructive deliberations on all issues relating to media freedom and responsibility needed to be initiated amongst all stakeholders.During the course of his address, Jaitley recalled the outstanding contribution of Justice J.S.Verma in the domains of human rights, gender equality, probity, and media freedom as the conscience keeper of the society.