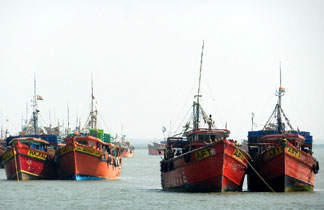 Odisha Channel Bureau Paradip, Jan 28: The green signal accorded to foreign trawls for sea fishing in country’s seawater has sparked off protest from Odisha’s seagoing fishermen and trawl operators.Decrying the move, which according to them is detrimental to coastal security and livelihood stakes of thousands of families living on sea-fishing, the Odisha Marine Fish Producers’ Association (OMFPA) had resorted to agitation had stayed away from sea-fishing and trading activities on January 19.The union government on November 12 last has issued notification granting letter of permit (LOP) to foreign sea-worthy vessels within 12 nautical miles of state sea territory and 250 nautical miles of exclusive economic zone coastal waters.It’s out and out arbitrary.It has begun adversely affecting the stakeholders of sea-fishing. The foreign fishing vessels not only pose threat to coastal security, but also are jeopardising the livelihood stakes of thousands of native villagers who depend on marine fishing, claimed president of OMFPA Sumant Biswal.The state-of-the-art foreign vessels are exploiting rich fish resources in deep sea.The fish catch in the process is being dispatched to their respective countries.In the process, the country is being deprived of foreign exchange. As many as 2,500 sea-worthy deep sea vessels and over 40,000 gill netters and medium size vessels operate in Odisha for fishing voyage on daily basis.The return from the fish catch is estimated at Rs 1800 crore.The foreign vessels’ intrusion has dealt a severe blow to the sea-fishing-regulated economy of seaside pockets of the state, OMFPA office bearers iterated. “The permit letters given to foreign vessels by the Union agriculture ministry are being grossly misused.It has been found that foreign crews are intruding upon our water territory without any proof of nationality and fishing license of their domicile country,” alleged some fishermen here.“The Maritime Zone of India Act and letter of permit issued to foreign vessels bars foreign fishermen from entering into 12 nautical miles zone from the coastline.But these vessels flout the binding norms with impunity,” they said.As many as one lakh families are entirely dependent on sea fishing across the state.Deep-sea fishing by the foreign vessels is taking a toll on fish yield.Traditional marine fishermen are being badly his as vessels are making their way into 12 nautical miles state water territory.District Fisheries Officer, Gyan Ranjan Samal said “the state fisheries wing is devoid of any control over sea fishing by foreign vessels.The union agriculture ministry is empowered to do away with such practice.There is no denying of the fact that foreign trawl fishing would have a derogatory effect on local fisheries-regulated economy.The department has taken up the grievances of affected families with competent authorities”. “Our resources are limited.Our crafts are small.They come in the hundreds and in bigger vessels.The smaller boats can’t compete.Our fish catch is bound to make drastic nosedive because of over-exploitation of fish reserve by foreign vessels,” remarked a seagoing fisherman from Sandhakuda hamlet, Tarapad Mandal.