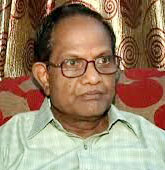 Odisha Channel Bureau Cuttack, Jan 28: Former Chief Justice of the High Court of Sikkim Justice Radha Krushna Patra, who was heading the one-man Commission of Inquiry to probe the mega chit fund scam in Odisha, passed away here this morning.He was 72.Justice Patra, who was worked a Judge of the Orissa High Court during his career, was admitted to SCB medical college and hospital in Cuttack with complaints of dyspnea, chest congestion and angina on January 24.He was later put on life support system at the Intensive Care Unit (ICU) of medicine ward, and his condition started deteriorating since last evening.As the news spread, Chief Minister Naveen Patnaik, Chief Justice of Orissa High Court Justice Amitava Roy, Director General of Police Sanjeev Marik and a host of dignitaries visited the residence of Justice Patra and expressed their condolences.The leaders of many political parties and eminent citizens expressed their condolences over the demise of Justice Patra.The body of Justice Patra was later taken to Swargadwara in Puri for cremation.The State government had constituted the one-man Commission for the chit fund scam probe and appointed Justice Patra as its head in July 2013.The Commission had received more than 10 lakh affidavits from the depositors and had recently started the process of digitising the complaints.The Commission had been given three extensions so far.