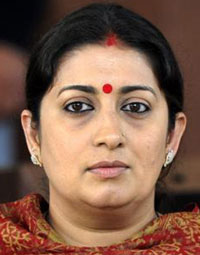 Odisha Channel Bureau New Delhi, Feb 3: The NCERT should compile a book in consultation with the Ministry of Defence on the persons who have sacrificed their lives for the cause of freedom of the nation, Union Human Resource Development Minister Smriti Irani said here today.Chairing the 52nd General Council Meeting of National Council of Educational Research and Training (NCERT), Irani said that the book could be named as Veergatha.Special emphasis may be given to women achievers and freedom fighters in the book, she added.The meeting was also attended by the Education Ministers of States and UTs besides eminent academicians.During the deliberations, the Minister also called upon the States and all the stakeholders to give their suggestions on the new education policy in mygov.in and also asked NCERT to have extensive consultations and discussion on the NEP and the curriculum with the States up to the grassroot level.This exercise is to be completed by August this year and the report submitted by September 2015, according to a PIB release..During the meeting the General Council also approved the Annual report and the audited accounts of NCERT for the year 2013-14.