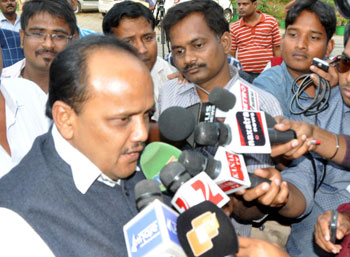 Odisha Channel Bureau Bhubaneswar, Nov 21: Biju Janata Dal legislator from Choudwar-Cuttack Pravat Biswal was quizzed by the Central Bureau of Investigation here on Friday in connection with the chit fund scam case involving the Seashore Group.Biswal arrived at the CBI office in the city soon after Rajya Sabha Member and Odisha Jan Morcha president Pyarimohan Mohapatra left the place after being questioned for more than four hours.Biswal is the second sitting legislator of the ruling BJD to come under the CBI scanner for his alleged involvement in the chit fund scam.The BJD MLA was once close to Mohapatra before the later was ousted from the ruling party after making a futile coup attempt against Chief Minister Naveen Patnaik in May 2012.Senior BJD legislator from Banki Pravat Tripathy was earlier arrested by the CBI for his alleged links with the Artha Tatwa Group which is involved in the Ponzi scam in the State.Tripathy is in judicial custody at present.His bail petition was heard by a local court on Friday and further hearing on his plea will be held on November 27.BJD Lok Sabha Member from Mayurbhanj Ramachandra Hansdah was earlier arrested along with former BJD MLA Subarna Nayak and former BJP MLA Hitesh Bagarti for alleged links with Nabadiganta Capital Financial Services, another chit fund firm involved in the scam.Hansdah, Nayak and Bagarti too are in judicial custody at present.