India is graduating from Megawatts to Gigawatts: Modi 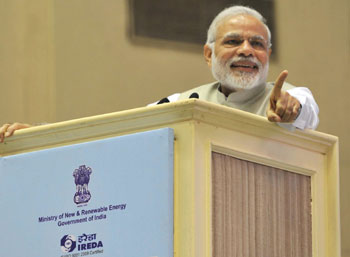 Odisha Channel Bureau New Delhi, Feb 15: Prime Minister Narendra Modi today described India’s thrust towards renewable energy production as an effort to ensure universal energy access for India’s poor.He was speaking at the inauguration of RE-Invest 2015, India’s first Renewable Energy Global Investors’ Meet and Expo here.Observing that India has now graduated from Megawatts to Gigawatts in terms of renewable energy production, Modi said that even today there are lakhs of families in the country that are deprived of energy connectivity.He said the fruits of development will not reach the common man until energy connectivity reaches every last household of the country.The Prime Minister asserted that in this age of globalization, we have no option but to make a quantum leap in energy production and connectivity.India’s stress on renewable energy is not aimed at impressing the world, but to meet our own people’s energy requirements, he added.Modi spoke of the “seven horses of energy”.He said that so far, India has focused on thermal, gas hydro and nuclear power.But now we need to add Solar Energy, Wind Energy and Biogas Energy.He said India is also working towards evolving a consortium of about 50 countries that are blessed with abundant solar radiation.This will aim to pool research and technological advancements in the field of solar energy, to improve its accessibility to the poorest of the poor, and in the remotest of locations.Modi suggested the possibility of hybrid energy parks harnessing solar and wind energy together in an area to maximize benefit.He also encouraged the installation of solar panels over water bodies to harness solar energy as well as minimize surface evaporation.He further spoke about the need for harnessing rooftop solar power.In the rural areas, he stressed on the need for solar pumps to reduce input costs for farmers.He further spoke about need for micro-irrigation to conserve water and enhance crop yield for farmers.According to an official release, Modi welcomed initiatives by many state governments in this direction.This collective effort, he said, will truly take the country “from Megawatts to Gigawatts”.He said that if any country has the potential to lead the world in the domain of renewable energy, it is India.“Loving nature and living in harmony with nature is a part of India’s DNA.At the same time, he said, we cannot merely rely on our culture and traditions to carry us through, but sustained efforts are needed to make a quantum leap in this direction.” He called for sustained technological research in renewable energy; and a thrust on domestic equipment manufacturing for renewable energy as part of the “Make in India” initiative.Union Minister of State (Independent Charge) for Commerce and Industry Nirmala Sitharaman, and Union Minister of State (Independent Charge) for Power, Coal and New & Renewable Energy Piyush Goyal were present on the occasion.