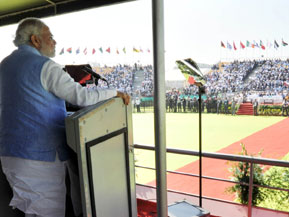 Odisha Channel Bureau Bengaluru, Feb 18: Prime Minister Narendra Modi today said that the Indian aerospace industry would need about 200,000 people in another ten years.Inaugurating Aero India 2015 here, Modi said that defence budgets around the world are becoming tighter.India’s frugal but sophisticated manufacturing and engineering services sectors can help reduce costs, he said.The Prime Minister further said that India can also be a base for export to third countries, especially because of India’s growing defence partnerships in Asia and beyond.“A strong Indian defence industry will not only make India more secure.It will also make India more prosperous,” he observed.“Aero India can be a catalyst in realising our goals.That is why I am here today,” he said.He expressed hope that Aero India 2015 can sow the seeds of successful new ventures and partnerships “to give our people new opportunities, to make our nations safer, and the world more stable and peaceful”.Stating that the country needs a vast pool of highly skilled and qualified human resources for the defence industry, Modi said the government will set up special universities and skill development centres to cater to the defence industry as had been done in atomic energy and space.More than 250 Indian companies and more than 300 foreign firms are participating in the Aero India 2015, Asia’s premier air show.